2 Sun./ Adv. A: Responding to John the Baptist’s call to repentance 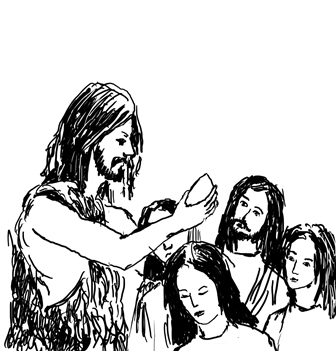 2 Sunday of Advent, Year A

To prepare the way for the coming of the messiah, John the Baptist, the last of the Old Testament prophets and the first of the New, went to the desert to preach a baptism of repentance around the Jordan river, announcing: Repent, for the kingdom of heaven is at hand (Mt 3:1). The way he dressed looked weird, with a garment of camel-hair, a leather belt and living on locusts and wild honey (Mt 3:4).

And yet, as we learn from the gospel today people from all over Jerusalem, Judea and the whole region flocked to hear him speak and to be baptized by him. The baptism of repentance by John was not the sacrament of baptism and therefore it was not for the forgiveness of sin. It was merely a temporary rite to prepare the people to receive the messiah. He announced the messiah would be coming to establish his kingdom, to fulfill the people’s expectancy.

His message was pleasing to the people because for centuries, they had been under the colonialism of the Persians, the Egyptians, the Syrians, the Greeks and the Romans. John awakened in them a hope of independence from the Roman occupation. Many Pharisees and Sadducees also came and asked to be baptized by John but they showed no sign of repentance. They did not want to level their mountains of pride and hypocrisy. They did not want to shake off their complacency, indifference and self-righteousness. Temporal values have blinded their minds and hearts so much, that they could not stand the idea of repentance. John the Baptist warned them severely: You brood of vipers! Who warned you to flee from the coming wrath? Produce good fruit as evidence of your repentance (Mt 3:7-8).

According to the Dead Sea Scrolls found in Qumran in 1947, John the Baptist was thought to be one of the leaders of the Qumran monastery. The Qumran monastery belonged to the Essenes as opposed to the other two branches of Judaism: the Pharisees and the Sadducees. When time came, John the Baptist appeared in the desert of Judea, preaching a baptism of repentance. John’s message of repentance (Mt 3:2) was also Jesus’ message of repentance: Reform your lives! The kingdom of heaven is at hand (Mt 4:17). Therefore, we can see John’s way of life and his teachings were close to the Gospel values. Repentance in the biblical context means admitting our sins committed, atoning for past sins, and reforming our lives or avoiding sin again. Reading the gospel, we see the Pharisees and Sadducees often opposed Jesus. In his teachings, Jesus accused the Pharisees of their hypocrisy, arrogance and pride. Repentance demands a total reformation of our lives. Repentance begins with an act of humility, realizing that we have sinned and deciding to return to God. Some people find it hard to admit that they need repentance because they think they do not miss mass on Sundays, do not murder and do not commit adultery. However, if we look carefully into our lives, then we need to repent our sins and to reform our lives.

The second Vatican Council in its Constitution on the liturgy stated: The Church announces the good tidings of salvation to those who do not believe, so that all may know the true God and Jesus Christ, whom he has sent, and may be converted from their ways, doing penance (On the Sacred Liturgy #9). The Council also said in the same document: To believers also, the Church must preach faith and penance (ibid). The penance referred to means repentance.

Repentance is not so much an external change, but an internal one that influences our whole life. Repentance is a true change of heart; necessary for inner conversion Repentance is different from guilt feeling. It is not psychologically healthy to foster a guilt feeling when sin has been confessed sincerely and forgiven. A feeling of guilt keeps us distant from God. It is not psychologically harmful to foster a spirit of repentance. A spirit of repentance should help us stay closer to God in mind and heart.

Prayer for a spirit of repentance:

Oh Savior about to be born!

To prepare for your coming,

Forgive me for the times I was indifferent,

For the times I hardened my heart.

Stir up in me a spirit of repentance

so that I may welcome you into my heart. Amen.