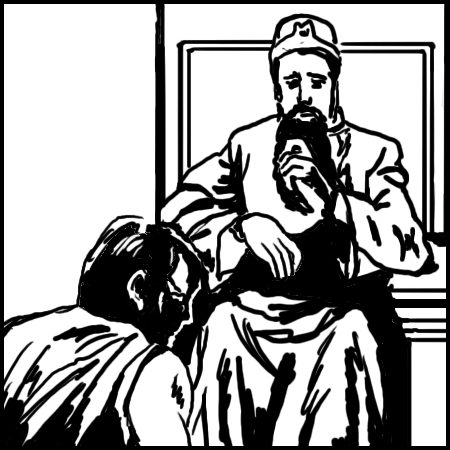 Forgiveness is a theme recurring repeatedly in scripture. God forgives his people because he is a forgiving God, not because the sinner deserves his forgiveness. Sometimes, we do find in the Bible that God got angry and decided to punish his people. However, in those cases, the bible speaks of those who deny God's love and reject his forgiveness. The scripture readings today tell us it is with mercy that God forgives each one of us, but also it is our duty to forgive one another.

To respond to a question of Peter who wanted to know how often he had to forgive his brother when his brother sinned against him. Then Peter himself suggested a generous answer: As many as seven times (Mt 18:21). In scripture, number seven means totality, completeness. Jesus told Peter to forgive seventy-seven times (Mt 18:22), meaning to forgive indefinitely without any limit to the number of times.

Then Jesus brought up a case of a servant who, was forgiven by a king for a huge amount [1], but refused to forgive his fellow servant who owed him a much smaller amount. Jesus used this occasion to call upon us to show mercy and forgiveness toward one another. This is also the occasion for us to learn the lesson of the servant, who refused to forgive.

The servant who was forgiven so much was expected to forgive his fellow servant who owed him so little. For us, what makes forgiveness difficult is when we have been offended and hurt badly. It makes us suffer emotionally like a thorn in our heart. We would like to forgive, and to have the burden lifted from our shoulders. However, we find it difficult to forgive and forget. That is the moment we have to make a decision.

Either we want to continue to harbor resentment as the reading from the Book of Sirach today points it out, or we can forgive as to be free. Even after we have decided to forgive, the hurt feeling might be still there. In this case, what we can do is to pray for those who have offended us. Then that hurt feeling will go away with times passed. Thus, we will be at peace. With those whom we meet occasionally, it is easy to forgive. With those whom we live day after day, and with those whom we are in daily contact, it is harder to forgive. It is necessary to forgive if we want to live in peace and harmony.

Whoever has betrayed by a dear friend or a loved one should have experienced how painful it was. There are those who have been betrayed by loved ones, do not want to meet and trust any person of the opposite sex. The Book of Sirach today warns us: Could anyone refuse mercy to another like himself, can he seek pardon for his own sins (Sir 27:4). Jesus understands our human weakness and is willing to forgive. He prayed asking the Father to forgive those who persecuted him: Father, forgive them for they know not what they have been doing. Realizing that man is weak and imperfect, we must be willing to forgive, for we might be the cause of suffering for others.

Every day we owe one another a debt of offense and hurt by words and deeds. There are offenses of which we were not aware – only God knew – such as our wrong judgment of others. Therefore, we need to pay them back by our forgiveness.

At the beginning of the mass, we have the opportunity to confess our sins publicly, before bringing gifts to the altar. Just before Holy Communion, we pray together the prayer Jesus taught us: Forgive us our trespasses. To forgive others is the condition for God to forgive us. If we think our prayer for forgiveness of sins is too general, not sufficient to stir up our gratitude for God’s forgiveness, then we need to remember some detestable sins of ours: sin against God, sin against neighbors as to stir up a spirit of sorrow. To experience God’s mercy, will we have a spirit of mercy? The law of mercy and forgiveness is essential to the Gospel and the Christian life. Today we ask God to teach us the lesson of gratitude for his forgiveness of our sin.

A prayer for a spirit of forgiveness:

O Lord, the Son of the living God!

We thank you for coming into the world,

to suffer and die for the salvation of humankind.

You taught us the lesson of forgiveness.

Grant me a generous heart

so that I may forgive those who have trespassed against me

and thus receive  your forgiveness. Amen.

[1]. A Vietnamese edition reads as ten thousand talents of gold.