14 Sun. / Ord. B: Preception about God and religion is an obstacle to faith 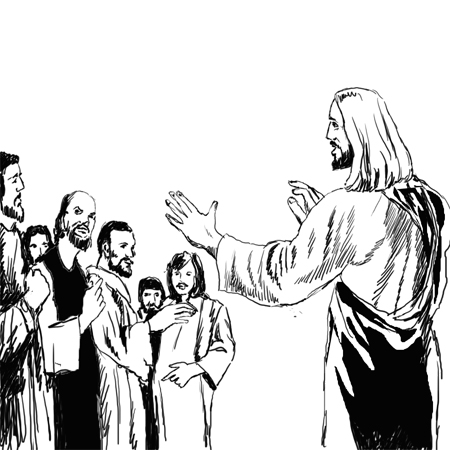 In the Old Testament, God spoke to humankind through the prophets and forefathers. Yet the prophets whom God sent were often mistreated and abused. The prophet Ezekiel was sent to the Israelites who have rebelled against him (Ez 2:3). Like the prophets, Saint Paul also suffered insults, hardships, persecutions and constraints, for the sake of Christ (2Cr 12:10). Finally, God sent his only Son to reveal to his people his love and his way of life.

When Jesus came to his native place, he was opposed and rejected as the Gospel today tells us. The people of Nazareth did not complain that his message was superficial and shallow. On the contrary, they were surprised at his profound teaching. However, they did not accept him, because they reasoned, Jesus did not attend any rabbinical or scribal school. People in today’s Gospel thought they knew all about Jesus’ family, his person and profession.

They knew he was the son of Mary, a housekeeper among themselves and the carpenter’s son. So why did he know so much about scripture. Their preconceived ideas were fixed. They fostered their wrong ideas about a messiah. For them a messiah must be a well-known political leader, an excellent social reformer and a first-class military conqueror, capable of making their country number one. When they realized Jesus did not fit their own notion of what a messiah should be, they rejected him. For them, Jesus could not be a messiah. Their preconceptions were an obstacle to their faith in Jesus, in his words and his power as Jesus wanted them to believe in. That is why Jesus said to them in today’s gospel: No prophet is without honor, except in his native place, among his own kindred and in his own house’ (Mk 6:4). The Gospel continues: Jesus was not able to perform any mighty deed there, apart from curing a few sick people by laying his hands on them (Mk 6:5). The reason why Jesus could not perform any miracle there was because of their lack of faith (Mk 6:6).

We might blame the people in today’s Gospel who rejected Jesus. However, we might be guilty of similar kinds of behavior also. If we are looking for God only in people of high position and power or in magnificent places, we will find it hard to recognize him. God is also present in the ordinary people and things of everyday life. We will find it hard to see God’s presence in the ordinary people and things we meet if we allow familiarity breeds contempt attitude to creep in our thinking. God exists not only in ordinary places like a small town of Nazareth but also in dirty and smelly places like Bethlehem.

We can find God in the sick, the poor and the imprisoned. That is what Jesus said in the Gospel: For I was hungry and you gave me food (Mt 25:35). In order to be able to believe, one must keep one’s mind and heart open. If we allow ourselves to be blinded by preconceptions about God and religion, they might block the entrance of God into our lives. If we cite reason to close our mind and heart, then there is nothing God can do about, because he has given us free will and he respects our freedom to choose. God’s grace and power depend on our openness to him. God does not force anyone to follow him and his way. He only invites. To accept his invitation depends on us. When we let our preconception and jealousy creep in, we will not see the potential and good points in others.

If we judge others’ words or deeds on their academic degree, career, power and family background, we allow preconceptions to creep in our judgment. A word or deed that is of value is objective, not depending on a person’s degree, profession, power and educational background.

To hear about others’ mistakes, that make a person close his mind and heart to them, not seeking to approach them, not giving them an occasion to explain his reasons is a narrow-minded view. To conclude that a person is so and and so, after having met that person briefly a few times and exchanging a few words is a shallow observation. To abandon Sunday worship/homily because a priest celebrant’s verbal ability or his education is called into question is a decision not founded on faith.

A prayer for an open mind and heart:

Oh Jesus, we thank you for the gift of faith

we received at baptism.

Forgive me for the times I let preconception about religion

and people to be an obstacle to my faith in you.

Grant that I may eliminate my preconceived ideas

and open my heart

so that I may see people and things

from the light of faith.  Amen.