20 Sun. / Ord. B: An invitation to believe in and eat the bread of life 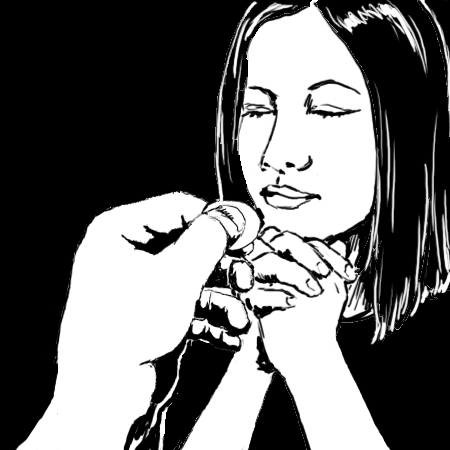 When Jesus was tempted to turn stones into bread, he quoted the book of Deuteronomy (Dt 8:3) to chastise them: Not on bread alone is man to live, but on every utterance that comes from the mouth of God (Mt 4:4). The word of God in the bible has been becoming the reason to live for the Jews through centuries, even before the coming of Christ.

Today’s gospel invites people to put faith in the bread of life. Jesus knew his preaching on the bread of life would shock people. They questioned one another: How can he give us his flesh to eat? (Jn 6:52). Even the apostles felt harsh to hear when Jesus spoke of his body and blood as the spiritual food. However, Jesus did not withdraw his teaching. He did not change his preaching with the expectation to get a big catch of fish, i.e., attract more people to hear. He preached with conviction.

Because he is sure about his preaching, he did not compromise according to people’s opinion and wish, he still preached the truth: For my flesh is real food and my blood real drink (Jn 6:55). The Jews were not the only ones who argued among themselves how Jesus could give his flesh and blood as the spiritual food. Throughout the history of Christianity, people also argued similarly about the presence of Jesus in the Eucharist. Since the time Luther separated himself from the Catholic Church and established his own church, many Christian denominations have appeared.

Most Christian denominations only emphasize the preaching of the word of God, without belief in the body of Christ. A number of other Christian denominations, besides preaching the word of God, commemorate the last supper, similar to the catholic mass. However, they consider the breaking of bread only as a memorial, a symbolic presence of Christ only, not the real presence of Jesus in the Eucharist.

These days influenced by other Christians, a number of Catholics have a tendency to emphasize scriptural readings in a religious gathering without attending mass in order to receive the Eucharist. For Catholics, the word of God and the body of Christ are both spiritual food. Reading and reflecting on the word of God without attending mass and receiving communion to be united with Christ in the Eucharist is a loss of Catholic identity. There is a proverb that says: Too much familiarity makes things boring, meaning people do not appreciate what they always have in hand.

Only when people have lost it, they would miss it. Suppose in a rather long period, there is no priest and no mass, how would people appreciate the importance of the mass? To strengthen faith in the real presence of Christ in the Eucharist, the faithful might want to visit places where the Eucharistic miracles took place.

In the year of 750 at Luciano in Italy, Jesus gave a proof of his real presence in the Eucharist, when a religious priest doubted that Jesus was present in the Blessed Sacrament. After the words of consecration of wine by the priest, he saw the host change into flesh and the wine into blood. This miracle of bread and wine transformed into the body and blood of Christ is still being kept at the chapel of Luciano. Recent laboratory tests have been done a number of times by different experts confirm it is human flesh and blood, preserved incorrupt.

In the year of 1263, a German priest was well known for his prudence and high morals. Yet he was much doubtful in faith about how the word of consecration by a priest could transform bread and wine into the body and blood of Christ? On a certain occasion, he went to Bolsena, Italy for a visit and asked to celebrate mass in the church of Saint Christina. At the consecration, seeing the Host appeared as true bloodstained flesh and blood dropped from the consecrated host on the corporal, he was terrified, stopped celebrating the mass, put the consecrated Host in the tabernacle.

With deep repentance, he hurried to go and confess his sin of doubt to Pope Urban I, who resided at Orvieto at that time. The Pope brought the Blessed Sacrament by the miracle with reverence to the church in Orvieto and placed in the tabernacle. That was the first Eucharistic procession in the Church. The following year of 1264, he established the feast of Corpus Christi. This Eucharistic miracle is displayed for people to see annually on the Solemnity of the Body and Blood of Christ.

Also mentioned are the miracles of the Eucharist such as:

- The miracle of Saint Anthony of Padua with the Eucharist in 1227;

- The miracle of the incarnated Host at Alatri, Italy in 1228;

- The miracle of Saint Clare of Assisi with the Eucharist in 1240;

- The miracle of the Eucharist at Bagno di Romagna, Italy in 1412;

- The Eucharistic miracle of healing from ataxia at Lourdes, France in 1888;

- The Eucharistic miracle of healing from blindness at Lourdes, France, in 1889;

- The Eucharistic miracle of healing from a coma at Lourdes, France in 1899;

- The miracle with the face impressed on the consecrated Host at La Réunion, Africa in 1902. [1].

There are those with sadness and shame, unable to tell anyone and cry in front of anybody. They can only cry in front of the tabernacle with the Blessed Sacrament present. So is it not called a miracle? There was a foreign priest studying in the US who, at a certain time, decided to make a silent retreat at a small monastery in a rural area. In the evening, he entered the chapel, kneeling just a few feet in front of the tabernacle with the presence of the Eucharist. Before he could say anything, his tears flowed out continuously, wetting his cheeks. His life changed since then.

A moment of intimacy with the Lord comes to each person at a different time, different circumstance, and different occasion. No one’s is similar to another’s.

A prayer asking for faith in the Sacrament of the Body and Blood of Christ:

We thank you for giving us your Body and Blood

as our spiritual food.

Forgive us for the times I received communion unworthily,

for the times I was doubtful about your presence in the Eucharist.

May your Body and Blood, which we receive