3 Sun. / Lent, B: My house shall be called a house of prayer 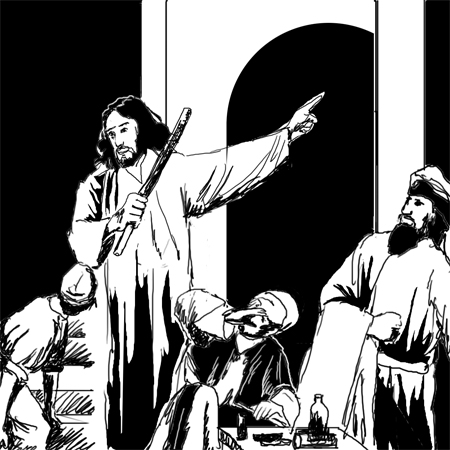 3 Sunday of Lent, Year B

Introduction: This is a homily/Scripture reflection in a book, titled: ‘Every Week God Speaks    We Respond’, Cycle B, intended to be published in the future by Reverend John Tran Binh Trong.

When Jesus went to Jerusalem for the approaching feast of the Passover, he saw people change money, sell and buy animals in the outer court of the temple, the court of the gentiles. He was upset, and drove them all out and he scattered their coins and overturned the tables of the money-changers. Jewish law forbade this kind of business.

Yet it was tolerated by the temple priests. The toleration was understandable since those, who came from a long distance were not expected to bring animals with them for sacrificial offering. So the selling and buying of animals in the outer court was considered convenient for people who came from afar. Convenient, yet not necessary since the sale of animals and the money changes could be conducted outside the gates of the temple. If the selling of animals and the money changes were considered convenient for non-residents of Jerusalem, then why did Jesus get upset with the money-changers and those who sold animals in the outer court?

The answer is the transaction of animal sale and purchase and money changes for the sacrificial offering had become commercialized. For the sellers, it was only a way to make money, and the buyers had to buy unwillingly for the temple sacrifice. Then the sacrificial animals had to be inspected by the temple officials to be certified as suitable for sacrifice. In reality, the temple officials wanted to have a monopoly of allowing contractors to sell animals in the outer court. Thus, the buyers had to buy animals there to be guaranteed as passed for sacrifice and they had to pay a price much higher than the market price. Then they also had to pay for the animal inspection fee. That was why the poor had to buy the contractors’ animals with exorbitant prices instead of the market price. Then the money transaction was not quite right.

According to Jewish law at that time, each male citizen above 19 years old had to pay the temple tax, equivalent to a two-day wage. Jesus also paid the temple tax (Mt 17:27). The temple tax was paid once a year with the temple currency since the Roman coinage imprinted with Caesar’s inscription considered idolatrous, not allowed to be circulated in the temple area. To exchange Roman and foreign currencies for the temple currency, a considerable fee had to be paid.

The Jerusalem temple, grandiose and magnificent, was built as a gift from King Herod, perhaps with a political purpose to please the people rather than with devotional purpose. Thus, there was no problem of debt to pay. Therefore, the service of animal sale and money exchange must have added money to the temple’s saving account substantially. The money exchangers and animal traders must have become rich and the chief priests must have had something for their pockets.

That was why in the Gospel, Jesus warned them: Do not turn my Father’s house into a market place (Jn 2:16). The Gospels of Mathew, Mark and Luke still quoted the Book of Isaiah to warn them: My house shall be called a house of prayer (Is 56:7) and used the words of the prophet Jeremiah (Jer 7:11) to chastise them: And yet you are turning it into a den of thieves (Mt 21:13; Mk 11:17; Lk 19:46). When the Jews asked Jesus to show some sign for his action, Jesus used this occasion to prophesy his resurrection from the dead, saying: Destroy this temple and in three days, I will raise it up (Jn 2:19). Here Jesus talked about his body as the temple lying in the tomb three days which they did not understand; neither his apostles did. When some disciples admired the temple saying to Jesus: Teacher, look at the huge blocks of stone and the enormous building (Mk 13:1), Jesus answered: Not one stone will be left upon another – all will be torn down (Mk 13:2).

In the year of 70 AD, General Titus of the Roman army brought troops to destroy the temple. He spared a portion of the wall to show future generations how great the Roman army was. In a pilgrimage, one priest whispered to another priest’s ear, saying: What the hell could they knock down this wall when there was no dynamite, tank, even bulldozer. Scripture today mentions the disciples recall the words of scripture: Zeal for your house consumes me (Ps 69:10).

Prayer for showing respect to God’s house of prayer:

Oh Lord God, you are God of all creation and providence.

You are present everywhere in the entire universe.

Particularly you are present in your church

where the Body of your Son present Eucharistic ally.

Teach me to show respect and love for your house

and find in your house of prayer

the source of strength, consolation and hope