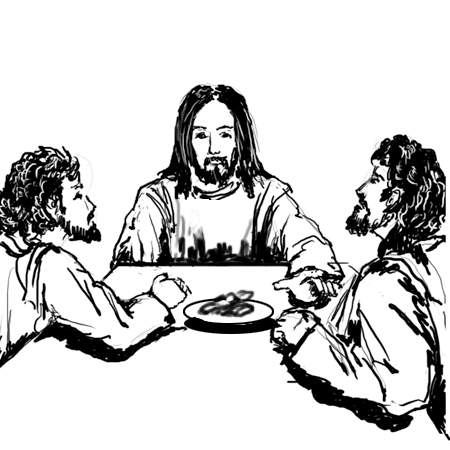 3 Sunday of Easter, Year B

Even though Jesus had foretold his death and resurrection three times before, the apostles still did not understand his way. The Good Friday event destroyed all their hope, such as hope that Jesus would establish an earthly kingdom, hope to have a position in his kingdom. The tragic on the cross still made them perplexed and fearful.

The two disciples on the road to Emmaus decided to quit, going home. Then Jesus appeared to interpret for them every passage of scripture, which referred to him. When they invited him to stay with them and when he took bread, pronounced the blessing, broke it and gave it to them, they recognized him (Lk 24:30-31). Peace was restored to them. Then the two disciples returned hurriedly to Jerusalem to meet the Eleven and they were told that Jesus had been risen and appeared to Peter (Lk 24:33-34). They also recounted how Jesus appeared to them and how they recognized him when he broke the bread. At this, Jesus appeared to them and wished them peace: Peace be with you (Lk 24:36).

The fact that the apostles in today’s gospel did not recognize Jesus at first was similar to the facts that Mary Magdala, the two disciples on the road to Emmaus and the other apostles did not recognize Jesus at first (Jn 20:14; Lk 24:16; Jn 21:4). Why was it so? The first reason was the apostles did not expect with faith that their master would rise as he predicted. The second reason, according St Mark, was when appearing to the apostles, ‘he was revealed to them completely changed in appearance (Mk 16:12), meaning the appearance had changed. The appearance changed was not that he looked worn out because of being tortured to death. St Paul explained Jesus’ risen body different from his body before his death as follows: So is it with the resurrection of the dead. What is sown in the earth is ignoble, what rises is glorious. Weakness is sown, strength rises.  A natural body is put down and a spiritual body comes up (1Cr 15: 42-44).

Before that, Jesus also appeared to Mary Magdala and some other women to reassure them (Mt 28:1-10; Lk 24:1-11; Mk 16:1-11; Jn 20:1-18). He also appeared to the apostles to strengthen their faith, and grant them peace and give them authority to act in his name (Mt 28:16-20; Mk 16:12-15; Jn 20:19-23). Specifically, Jesus appeared to Thomas to restore his shattered faith and grant him peace (Jn 20:24-29). Jesus’ greeting of peace has a special meaning for his disciples. To maintain peace, Jesus commanded them to preach penance for the remission of sin (Lk 24:47), because there would be no real peace, if they lived in the state of sin. That is why, Saint Peter preached repentance and conversion to God as to receive the forgiveness of sin (Acts 3:19). That is why Saint John told his faithful to avoid sin (1Jn 2:1) as to maintain peace.

Most of us carry within ourselves feelings of confusion, worry and fear at certain times in our life. Some are afraid of losing their job; some afraid of contracting an incurable disease; some are afraid of being separated due to divorce, war and death. Others are afraid of times of crisis and days of darkness.

If so, God wants us to discharge our worry and fear on his loving heart. He wants us to put our trust and faith in his providence. Trust in God is something we have learned from experience. Suppose after we have put our trust in material goods, power and position and they lead us to nowhere, and they might bring us more misery. From then on, we will turn to God. Through the apostles, Jesus also sent us peace. In our days, we hear so much about the desire for peace. If we travelled to Israel in the eighties of the 20 century and made a phone call, what we would hear from the other end of the line was not hello, but shalom, meaning peace. This tells us how much the Jews wanted peace. On the national and international level, peace according to Webster’s dictionary means a state of mutual accord between nations and factions. However, what does peace mean for each individual?

According to Webster’s dictionary, peace is a state of tranquility, freedom from conflicting ideas, and a harmony in personal relations. Peace in a biblical sense is a gift from God. Therefore, peace must come from each person’s heart. It must be rooted and developed in each person. Peace will reign in our hearts and among us, if we possess peace within ourselves.

Thus, there can be no real peace in our world, if people are not at peace with themselves. A person is at peace with himself/herself if God’s grace and friendship remain within him/her. So in order to have internal peace, one needs to reconcile oneself with God in the Sacrament of penance. In order to have internal peace, one must live according to God’s way and obey his commandments.

Prayer for peace through our belief in the risen Lord:

Why am I still doubtful about something?

I was baptized, have taken religious instruction

been attending mass and praying

but my heart is not so convincing.

Touch my life and soften my heart.

as you did give to the apostles

so that my soul may rest in you. Amen.