Mother of God, B: Mary kept all these things, refelcting on them in her heart.

Mother of God, Year B

Maternal love is the closest and most sacrificial love of all human love relationships. Perhaps due to the sentimental influence of a woman that in the family, children often feel closer to their mother than to their father. 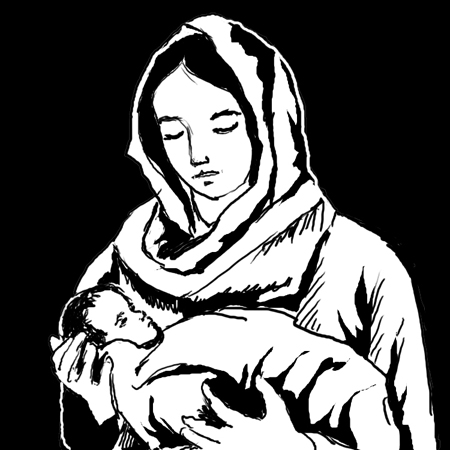 The mother seldom punishes, yet takes good care of their children, especially when they are still young. When her child is ill or handicapped, the mother still loves and cares for her child.

Some mothers are accustomed to collecting pictures of their children since infancy especially on special occasions. Other mothers make a habit of praying that their son may become a priest. When their son was ordained a priest, they were overwhelmingly joyful and thankful.

Mary’s motherly love toward her Son must have been special since she knew her Son was conceived miraculously and his mission was divine. Today’s gospel records: And Mary kept all these things, reflecting on them in her heart (Lk 2:19).

First, let us try to find out what things she kept in her heart? How did she keep them? How did she reflect on them? First, she must have kept the event of the annunciation and wondered about the meaning of the angel’s greeting: Rejoice, O highly favored daughter! The Lord is with you (Lk 1:26). She must have reflected on what she said to the angel how it could be since she did not know man. Only when the angel guaranteed that her conception would take place through the power of the Holy Spirit, Mary did accept the motherly role of the Son of the Most High. Mary must have reflected on why Elizabeth said: Who am I that the mother of my Lord should come to me (Lk 1:43). She must have thought over on why the infant in Elizabeth’s womb leapt for joy (Lk 1:44). Mary must have reflected on the words of the Old Testament predicting seven hundred years before that the virgin would be with child and bear a son (Is 7:14) implying her and her son.

She must have pondered over and over  so that she could raise her voice praising God for his goodness he had done in her in the Canticle Magnificat (Lk 1:46-55). Mary must have reflected on how her Son was born in poverty at the manger for animals, yet angels appeared to sing and praise and the three astrologers came to worship. When offering Jesus to the temple, Mary must have pondered over the words of Simeon predicting the saving grace brought about by her Son: For my eyes have witnessed your saving deed displayed for all the people to see (Lk 2:30-31).Mary must have astonished when Simeon predicted: And you yourself shall be pierced with a sword (Lk 2:35). She must have reflected on the words of Anna, the only prophetess in scripture saying of her Son as the Savior (Lk 2:38).

When they have found their Son lost in the Temple, and Jesus answered: Did you not know that I had to be in my Father’s house (Lk 2:49). Here scripture also recorded: His mother meanwhile kept all these things in memory (Lk 2:51). In his public life, Mary must have reflected on what happened to her Son, when he was admired and praised, yet he was opposed and rejected.

At the foot of the cross, when Jesus entrusted Saint John to her: There is your son (Jn 19:26) and her mother to Saint John: There is your mother (Jn 19:27), Mary must have reflected on what happened to her son on his last days on earth: being persecuted, interrogated, flogged, crowed with thorns and died on the cross. In reality, Mary must have reflected on the prophetic word of scripture about her Son during her nine months and ten days of pregnancy and her entire life.

She must have reflected on those things and events that happened to her and her Son, not to let worry and suffering lie inactive in her mind and idle in her heart, but to find out how things happened that go with prophetic words in scripture. Mary kept these things and reflected on them with her faith of acceptance as to harmonize with the suffering of her Son according to God’s plan of salvation for his glorious resurrection.

Today we need to ask ourselves whether we have reflected on things both good and bad happened to our family and ourselves. Have we reflected on natural disasters in the universe such as earthquake, hurricane, flood, fire or mishap such as shipwreck, airplane crash and automobile accident? Have we reflected on misfortunes such as war, violence and terrorist attack?

Have we let them go by and go into oblivion? If we remember, have we let them lie inactive in our mind? When some people told Jesus about some Galileans who, were killed by Pilate, Jesus told them not because they were worse sinners than others in Galilee were. Jesus just told them they would come to the same end unless they reform (Lk 13:2-3). The reason those eighteen who were killed by a falling tower in Siloam was not that they were guiltier than others in Jerusalem were. Jesus just told them to turn away from their sin as to avoid that disaster (Lk 13:4-5). Suffering, death, disaster, misfortune might be signs that God wants to tell us something. Is it that God tells us to amend our lives?

Following Mary’s example, we also reflect on the word of God in scripture. We reflect on those misfortunes and disasters that might happen in the world and to us and to our family as to find out meaning behind them. In order for those misfortunes and disasters not to fall into oblivion, we might want to take notes in our diary. On their anniversary, we may review and reflect prayerfully on them again. There are certain things appeared successful in the eyes of man, yet consider as a failure and loss in the eyes of God.

With time passed and reflection, we might see them as beneficial to us in the long run in a different aspect, especially in the the spiritual sphere.

A prayer asking to be Mary’s child:

O Mary! At the foot of the cross,

Jesus entrusted you to us through John.

From now on, I accept you personally as my mother.

I ask you to be my mother also

so that I may walk with you

every step of my life.

Teach me to reflect on the word of God,

on those things that happen in the Church,

in the world and to me personally

so that I may find meaning for my life. Amen.