Preface of a book: 'Every Week God Speaks We Respond' intended to be published. 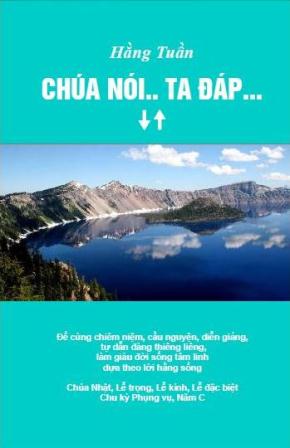 A certain priest said when he looked back at his homilies ten, twenty years before, he wondered how he could have preached that way, i.e., he laughed at himself, without blaming himself since he realized his knowledge and preaching experience at that time had been only that so.

That priest also said preaching the word of God is like the art of cooking. To cook a delicious and attractive meal, one must know how to cut meat, fish, vegetables and fruits in different ways: which seasoning is to be used, how long a certain meat has to be marinated. How long does a certain food need to be cooked, which food needs only to be stirred up on a hot pan? That is why each kind of food needs to be cooked separately and if appropriate, they can be mixed together into one dish. Therefore, it would be easy to chew, swallow and to be digested. To preach the word of God in such a certain way that people can be alert to hear, understand and assimilate is also an art.

The priest further said from this year to that year, one could not find an appropriate theme for a homily until at a certain moment; a suitable theme came up, expressing the main ideas of the scripture readings. If a theme were not selected, one would find it easy to wander around. Then a homily would be a collection of ideas, unrelated.

Then the same priest said when one wanted to have ideas for his homily or talk, he could not find ideas for his talk/homily for an hour, a day or a week. Then at night awaking from sleep, ideas came up suddenly. Ideas continued to come up, like each gust of wind blowing sycamore fruits down on a pond: plop, plop or apples down on the ground: thud, thud. In that case, one must get out of bed, making a brief note of ideas. If not, the next morning, one would forget. What a loss! Sometimes, after you have gone back to bed, ideas would come up again. In the winter night, covering you with a blanket and having to get up is a big effort to make. Yet, some night you had to get up a dozen times to have a short note jotted down. Ideas coming up suddenly like that are called intuition without reasoning.

Every week God speaks – We respond that came into existence was due to appreciative and encouraging words from the audience who had listened to Sunday homilies in English or readers who had read written reflections in Vietnamese posted in the internet and due to requests for copies of the homilies or written reflections.

The reflections have been preached in English or Vietnamese in those parishes in which the author has served as both an associate and pastor for about over thirty years. In those years, homilies have been revised; unwanted thoughts eliminated, changed partly or totally and new thoughts added according to the author’s experience of his personal journey of faith and pastoral ministry.

While preparing the homily, the preacher needs to let the word of God brood on his mind and heart for a week. When preaching, not only the preacher aims at the audience, but also at himself. When the preacher hears him preach or reads his homily, he then becomes the audience or reader to respond to God’s word, lest his word should lay inactive in the past or should become a one-way communication. In that case, one shall speak, write and hear with mind and heart. Without response, the word of God will become a monologue, something of the past, not related to the present.

Each homily/reflection has a theme depending on a salient thought drawn from the Gospel. Related thoughts of the first and second readings are drawn in to build up the theme.

-          With priests who are too busy with parish works and with religious brothers and sisters.

-          With lay Catholics in their preparation of mind and heart when coming to church to listen to the word of God and respond to his words each week with prayerful spirit at home, in office, when eating, resting, working and entertaining. To help reflect Sunday readings, a reader should read beforehand the three scripture readings of the mass concerned. After the evening prayer, a prayer after the reflection on the Sunday reading can be added. The reader can make the author’s prayer his/her prayer after each reflection.

-          With Christians or non-Christians who are seeking to find the truth or seek theological thought on the word of God or the catholic way of life.

English is not the mother tongue of the author who did not live in the US until his adulthood. To keep the author’s writing style, the book  has not been edited by a hired hand. Passive sentences are used intentionally in this context to avoid using the first personal pronoun ‘I’ when applicable, that might be associated with any idea of egotism, in accord with the French saying, known as: ‘Le moi est haissable’ (The ego is detestable).

This is not a book to be read in a few days or a few weeks, but to read one Sunday reflection for five or ten minutes each week, then to reflect and pray on the reflection. However, if inspired, one can read the whole book, and afterward one can read each Sunday reflection each week. After the three-year cycle, one can read over again. The reader is asked to use the catholic liturgical calendar to find out when to read which Sunday or which feast. However, the reader can read any theme interested in the contents.

If finding it helpful and pleasing, the reader is asked to recommend it to relatives and friends also. Those who had asked for copies of the author’s homilies and/or prayers before, and somehow due to the author’s forgetfulness, have not received them, can get them in these volumes of Every week God speaks – We respond. The book has been published in Vietnamese in the US in 2007 and re-published in Vietnam in 2010. To share Scripture refections with more readers, the author’s wish is to have this book translated and published in other languages.