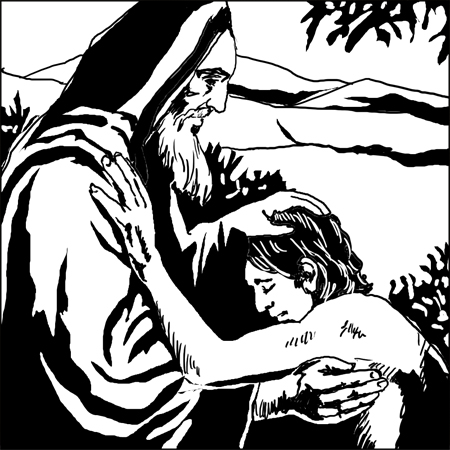 God’s kindness and mercy is a reality recorded in scripture. The book of Joshua tells us that the exile and slavery of God’s people in Egypt was considered as a reproach. Therefore, God decided to free his people, bringing them back to the Promised Land: Today I have removed the reproach of Egypt from you (Jos 5:9a). In the Promised Land, they ate of the produce and the yield of the land of Canaan (c.12).

Throughout the history of salvation, the chosen people have broken their covenants with God. They have abandoned their God in order to worship alien gods and molten cows. Every time they lost their way, God sent his prophets to warn them. Each time they repented their sins, God opened his outstretched arms to welcome them back with his merciful spirit. Finally, God sent his only Son to reconcile humankind to himself by applying the law of mercy and forgiveness. That is what we learn from the second letter of Saint Paul to the Corinthians today: God has reconciled us to himself through Christ and given us the ministry of reconciliation (2Cr 5:18).

In today’s gospel, Jesus told us a parable of the prodigal son (Lk 15:13) to show us that God wanted sinners to be saved. In reality, this parable aimed at the father rather than the son. So it could be more accurately called the parable of the loving, forgiving and merciful father (Lk 15:20) than the parable of the prodigal son. According to the parable, both sons were guilty of something. The younger son was guilty of greed and selfishness. The elder son was guilty of jealousy and unforgiveness. The elder son was living in the midst of his father’s property and possessions. Reasonably, he must have felt that all his father’s property and possessions was his since he would inherit them.

Here we may wonder to what category we belong. We act like the younger son when we abuse God’s gifts, when we are selfish, greedy and wasteful. We behave like the elder son when we are resentful of God who shows his mercy and forgiveness and favor to others. We are jealous of others who receive more gifts and favor than we do. We might have experienced something similar when we refused to forgive.

The background of today’s parable was the Pharisees and lawyers who were upset with Jesus because he welcomed tax collectors and sinners. They thought Jesus was easy on sin and they wanted him to set a limit for his mercy and forgiveness. The story of the parable does not elicit any experience in our daily lives. According to our experience in the human society, it is difficult to think of any father who is so good and kind that he would hurry to run out and welcome his prodigal son back before the son would have a chance to apologize and tell his story. The forgiveness of man is different from the forgiveness of God. Man’s forgiveness is limited. God’s forgiveness is unlimited.

If we have wandered away in a certain aspect of life, we need to have courage to rise and return. It is unfortunate if we forget God’s kindness, mercy and forgiveness. What we need is our trust and confidence in God’s kindness and mercy. God is still there waiting for us to show that we want to return and reconcile ourselves with him and change our way of life in order to live in peace and grace with God.

Prayer for God’s mercy and forgiveness:

Oh! God of mercy and forgiveness.

Grant those sinners who put their faith and trust

in you, your mercy and forgiveness.

Stir up in them a spirit of  repentance

and determination to avoid sins.

Do not let us discourage in our trust in you.

Remember your kindness in your dealing with us. Amen.