11 Sun / Ord. C: Asking for the Spirit of repentance for sins committed 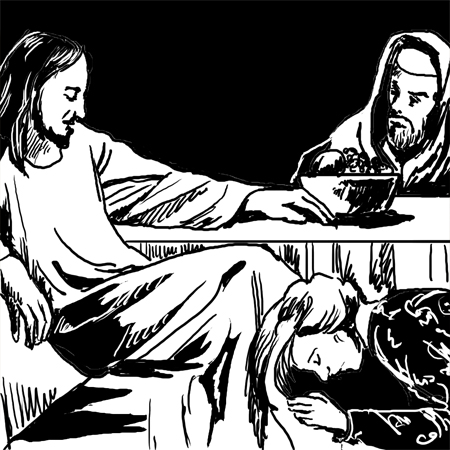 In our journey of faith, one may walk on a peaceful path; or one might turn to a dark valley. Four biblical figures in the scripture readings today present four kinds of sinners. A reading from the book of Samuel tells us king David fell into sin of adultery with Bathsheba, the wife of General Uriah. After he had sinned, King David attempted to cover up his sin. The king ordered Uriah to go home from battle so that when she would give birth, people would think that the child would be his. However, General Uriah decided not to go home because he was a good professional general who wanted to be with his soldiers at the battlefield.

Unable to cover up his sin in this way, King David put Uriah in the front line of the battle so that he would be killed and thus the king would be able to marry her. At this time, God sent Nathan to awaken his conscience. Being aware of his double sin of adultery and murder, David was struck with remorse. He made a quick return to the Lord. The king exclaimed: I have sinned against the Lord (2 Sm 12:13). The king expressed his sorrow for his sin in Psalm 51 which tradition attributed to him as author.

Today’s Gospel tells us about the sinful woman. Her sins alienated her from society. Finally, she came to Jesus, asking him to grant her new life and renewed love. She proved to Jesus a symbol of love by washing his feet and wiped them with her hair and anointed them with perfume. As Jesus said, she loved much and she was forgiven a great deal.

Was this sinful woman the same as the adulterous woman who anointed Jesus’ feet with oil in the Gospel of John? The answer is she was not the adulterous unnamed woman, who, was brought to Jesus by the Pharisees and scribes and asked if she would be stoned according to the law of Moses (Jn 8:3-11). She was not Mary Magdalene either as mistaken so far (Mk 16:9; Lk 8:2). In addition, she was not Mary, sister of Marta, who also anointed Jesus’ feet with costly perfume when he went to have dinner at Bethany, where Marta served (Jn 12:3-8).

In today’s Gospel, we can see a contrast between the humble attitude of the sinful woman and the arrogant attitude of the Pharisee. The Pharisee named Simon (Lk 7:40) did not do anything to show his hospitality. He asked himself if Jesus were a prophet, he would have known her sinful past, not allowing her to contaminate him. Therefore, the Pharisee did not believe Jesus was a prophet. Here Jesus turned the table on the Pharisee. He faced the Pharisee’s secret thought and began to preach about love and forgiveness. The Pharisee’s concern about law that limited his dealing with sinners and the just, plus his arrogant attitude made him forget a hospitality of a host.

He did not show repentance for his arrogance and hypocrisy of his Phariseism. On the contrary, the sinful woman’s deeds showed us how she was repented of her sin. To have a spirit of repentance, one must have a humble spirit, admitting his/her weakness and sinfulness. A repented person is one who is aware of his/her weakness and sinfulness. Recognizing her sin, the sinful woman repented by her tears. Only when one is aware of his/her sin, one would feel the need for repentance. The Pharisee considering himself justified did not feel the need to repent.

In his letter to the Galatians, we recognized another Pharisee, named Paul. When he was a Pharisee, Paul also sinned by his persecution of Christians. When converted, he changed completely. Saint Paul now had a personal experience of Jesus’ love, mercy and forgiveness.

The story of repented and forgiven sinners such as king David and the sinful woman and Saint Paul showed a human conscience. Repentance is different from guilt feeling. Having been forgiven, one needs not feel guilty. To stir up and maintain a guilt feeling may be a sign of doubt about God’s forgiveness. When we confess our sins sincerely and humbly with repentance and our sin is forgiven, then it is forgiven. However, it is good to maintain a spirit of repentance so as to be able to feel closer to God.

There are those who might feel jealous of those whose life was changed completely new, a clear-cut conversion from darkness to light like Saint Augustine because they had what they wanted both ways in this life and the next. However, we must come to realize that each person’s journey of faith is different. To repent, we need to pray for a spirit of fear of the Lord, not in a sense that we dare not come closer to God, but only to make sure that we do not want to displease him. The book of Sirach tells us: Fear of the Lord is the beginning of wisdom (Sir 1:14). However, there are two kinds of fear. Fear of God that makes us afraid of him is not good. Fear of God is only to make sure that we do not want to do things displeasing to him. This kind of fear is necessary for salvation.

Prayer for the spirit of repentance:

You are God of mercy and forgiveness.

You hate sin, yet love sinners.

Teach me to be humbly aware of my sin

and stir up a spirit of repentance

so as to be forgiven with your mercy. Amen.