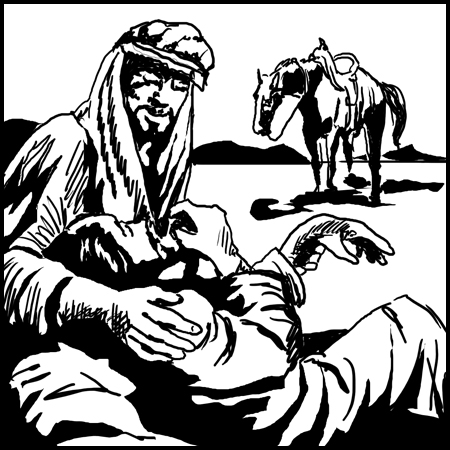 Realizing that a human being has a body, spirit and soul, a lawyer in today’s Gospel asked Jesus how to inherit everlasting life for his soul.  Reading the Bible, we can find out that Jesus often responded to a question by asking another question, especially when someone asked a question in order to trap him.

The lawyer in today’s Gospel asked Jesus a question, not to trick him, but he wanted to know. However, Jesus also asked him a question, to make him aware of his duty toward God, and to find out an answer for him. The question Jesus asked is: What is written in the law (Lk 10:26)? The lawyer answered by quoting the Book of Deuteronomy: You shall love the Lord your God, with all your heart, with all your being, with all your strength, and with your entire mind (Lk 10:27). Then he continued by quoting the Book of Leviticus: You shall love your neighbor as yourself (Lk 10:27). Jesus told him his answer was correct. Somewhere else in the Gospels, Jesus told a lawyer about the two most important commandments of love for God and neighbor (Mt 22:37-39; Mk 12:30-31). However, the lawyer was not satisfied with the general and abstract answer. He wanted to see something specific, wanting to know who his neighbor was (Lk 10:29).

Jesus told him the parable of the Good Samaritan. The Samaritan applied God’s commandment of love by taking a risk to go and rescue the victim of robbers. He disregarded an animosity between the Jews and the Samaritans at that time so as to come to rescue the victim. His love urged him to bring the victim to an inn for treatment and to pay for its cost. At that time, the road from Jericho to Jerusalem was much used on big Jewish festivals when people had to go to Jerusalem to pray. However, this road was also dangerous because it was hilly, steep and winding. It was a hiding place for robbers to attack travelers [1].

The parable of the Good Samaritan meant to say that everyone is our neighbor, not just the people whom we know, or live with, or the people with whom we get along. Today’s parable tells us about a notion of universal fraternity. Fraternity, which we reserve for those whom we do not know, is part of Jesus’ commandment of love.

We might think using the parable of the Good Samaritan to teach a lawyer a lesson would not be good policy because in those days, Jews and Samaritans disliked each other. Between them, there was something distant, even separating them. That was an animosity, mistrust and discrimination between the Jews and Samaritans. That was why when Jesus asked the Samaritan woman for water, she remarked sarcastically: You are a Jew. How can you ask a Samaritan, a woman, for a drink (Jn 4:9)?

Jesus was aware of that problem, yet he still taught the lesson of practical love, not concerning about regional ill feelings of the audience. We act like a priest and a Levite in today’s Gospel who ignored the victim’s need if we are concerned only about the vertical, the up and down relationship between God and each individual, at the expense of human beings.

There is another dimension in our Christianity: a horizontal relationship among God’s people as the scripture tells us: people are created in God’s image (Gen 1:27) and people redeemed by the blood of his Son Jesus (Mt 26:28). Our service to neighbor lacks foundation unless it is firmly built upon faith in Jesus, with the belief that God is present in our neighbor, and that to serve neighbor means to serve God indirectly.

Prayer asking for our love to be shown in action:

Oh God, you are God of love.

Out of love, you created every human being and every creature.

Also out of love, you sent your only Son

to come down from heaven,

Teach me how to show our love in action

towards others out of faith and love. Amen.