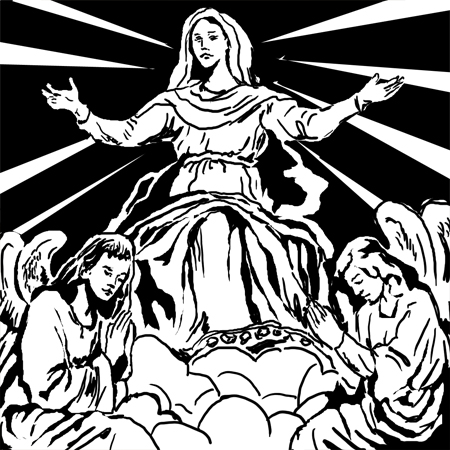 Besides two well-known sites where Mary appeared: Lourdes in France and Fatima in Portugal, Mary also appeared at different places in the world to counsel her children to live according to the way of God or to console them when they faced trials, sufferings and persecutions. In Vietnam in 1798, Mary appeared at La Vang to console and encourage the faithful who were persecuted for their faith under the rule of Emperor Canh Thinh.

Under persecutions and pressures to abandon their faith, the faithful fled to the forest of La Vang. They did not have enough food, drink and sleep. They were afraid of wild animals and snakes, especially soldiers going after them. They prayed to Mary because they suffered from persecutions and illness. The Lady appeared with her kind and affectionate countenance. According to one legend, Mary told them to pick ‘lá vằn’ leaves, pronounced in Quang Tri’s accent as ‘lá vằng’, and boil them and drink for healing. Later on, Lá Vằng was pronounced as La Vang. According to another legend, when people saw tigers, they shouted aloud to chase them away.

The bishops of Hue, both French and Vietnamese, had built a church at La Vang at four different times. Then, the Catholic bishops of Vietnam rebuilt the church in 1961. Destroyed by the war in 1972, the church was rebuilt temporarily in 1998 with financial help from overseas Vietnamese in order to celebrate the 200 anniversary of Mary’s appearance.

Church and civil officials had visited and prayed at our Lady of La Vang church such as Queen Nam Phương, Cardinal Spellman, Archbishop of New York, Cardinal Agagianian - Envoy of Pope John XXIII - and many other Vietnamese bishops, beginning from Bishop Nguyen Bá Tòng, first Vietnamese Bishop of Vietnam.

On the canonization of 117 martyrs from Vietnam in 1988, Pope John Paul II reminded the Vietnamese faithful not to forget the Shrine of Our Lady of La Vang, which was dedicated to Mary. On the feast of the Holy martyrs of Viet Nam 1992, the Pope also spoke: ‘I offer the Vietnamese community to Mary, Queen of the Martyrs, honored for almost two hundred years there and I wish for the people of Vietnam to live and grow in freedom and peace, so that they can participate in building and developing the nation’.

On the Solemnity of Mary the Assumption in 1993, the Pope spoke clearer: ‘I offer the whole community of Vietnam to the intercession of our Lady of La Vang. She the gentle mother appeared in 1798 to console her children under persecutions in the rule of Emperor Canh Thinh’.

In 1994, the same Pope blessed a statue of our Lady of La Vang at Saint Peter Square and the statue has been carried to different overseas Vietnamese Catholic communities so that people could pray to. In 1996, Cardinal Angelo Sodano, Secretary of the Vatican State sent these words in the name of the Holy Father to the conference of pilgrimage at La Vang: ‘The Holy Father is sharing your joy in communion of your prayers with the Archdiocese of Hue and with the whole country of Vietnam, also in communion of prayers with the shepherds, travelling with the faithful to La Vang, to honor and praise Mary, consoler and supporter of them in the times of difficulties and trials. The Pope himself also encourages the faithful to live faithfully and courageously’.

In 1999, Bishop Joseph A. Fiorenza with a committee delegation of the US bishops visited Vietnam and La Vang. After he had read a summary of the history of Mary’s appearance at La Vang, Bishop Fiorenza, representing the US bishops in America accepted our Lady of La Vang to be mother of the Church and people of America.

With his different visits and prayers at the Shrine of the Immaculate Conception of Mary in Washington, DC, Father John Trần Bình Trọng of the Diocese of Arlington, Virginia observed 59 small chapels in honor of our Lady, appearing in different parts of the world or in honor of certain saints. Reading a short history and praying a prayer related to Mary’s appearance or  different saints recorded on a kneeler in each chapel, Father Trọng had an idea of having our Lady of La Vang chapel to be built here. 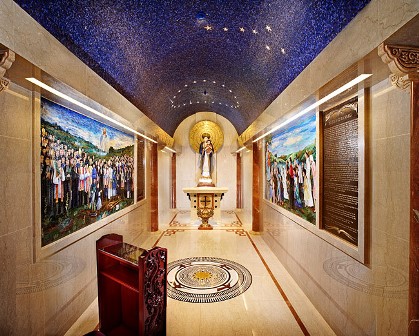 Chapel of Our Lady of La Vang in the Shrine of the Immaculate Conception of Mary in Washington, DC.

Our Lady of La Vang chapel was dedicated October 21, 2006 in a solemn mass celebrated by the Most Reverend Donald W. Wuerl, Archbishop of Washington and Chairman of the Board of Directors of the Immaculate Conception Shrine. The dedication mass was concelebrated by the Most Reverend Mai Thanh Luong, Auxiliary Bishop of Orange and over one hundred Vietnamese priests and almost five thousands Catholics from many states, even as far as from Massachusetts, Mississippi, Texas and California. That was the last space in the Shrine of the Immaculate Conception made available for our Lady of La Vang chapel. Some other countries could only hang a painting of Mary on the wall.

You are above all the angels and saints in heaven.

None can compare to you.

God graciously chose you, a pure and holy maiden,

to be the mother of the Savior of the world.

Oh Mary, you appeared at La Vang, amid the pain and misery of war and persecutions,

From the first moment, you poured your blessisngs,

spiritual and physical, upon the sick and the sorrowful who had recourse to you.

Oh Mary, Holy Mother of La Vang, Mother of God and our most loving Mother,

pour out your abundant blessings upon your children

who earnestly implore you.

Give us a heart of compassion and charity to build a culture of love and life.

Help us to live lives of virtue and hope,

with you for all eternity. Amen.

[1]. On the Feast of the Assumption of Mary, Cycle C, homilies on Cycle A or B may be used, instead of Cycle C.

[3]. A person who made an experiment by recording her voice, shouted out and echoed back from the forest and mountain, was Dr Nguyen Thi Thanh of Co Thach village as to prove why this place was called La Vang.