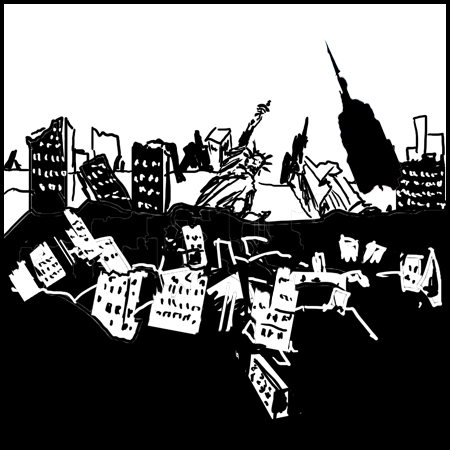 The liturgy of the word at the end of the liturgical year presents before our mind the prospect of the coming of Christ on the last day. Selecting a passage from the book of Malachi, the Church wants to remind us of the day of the Lord, when God vindicates his people and when the sun of justice will shine on those who fear his name (Ml 3:20). The gospel today uses warning signs such as wars and insurrections (Lk 21:9, earthquakes, famines, plagues and awesome sights and mighty signs (c. 10), making us think that the end of the world is at hand.

Discussing the last day, scripture writers (Book of Daniel, parts of Ezekiel’s, Book of Revelation, and the eschatological parts of the Gospel of Matthew, Mark and Luke) often used a kind of apocalyptic language. That is a symbolic language or patterns of thought, difficult to understand about the last day, referring to disasters in the universe such as wars, earthquakes, hurricanes and floods, causing destructions and deaths.

Images of destruction which the scripture authors used to talk about the last day had already happened somewhere in the world, not necessarily would happen in the future. The apocalyptic literature was supposed to be written before a disaster that would happen, to give a warning sign to readers, but actually written after a certain disaster had already happened. The last day was described in an apocalyptic image in the Book of Malachi: For lo, the day is coming, blazing like an oven (Mal 3: 19) and in symbolic image: The sun of justice with its healing rays (Mal 3:20).

The use of the apocalyptic language has the only purpose of warning those who do not care or those who care only about worldly things [1]. Thus, it does not mean that when wars, earthquakes and disasters happen, then the last day will be at hand. The temple of Jerusalem was destroyed. We ourselves might have witnessed wars, earthquakes, disasters, and we are still alive and the world still exists. Therefore, God’s word in the     apocalyptic language in today’s Gospel is to remind the faithful of the last day. It is the day, described in the apocalyptic image in the Book of Malachi: Blazing like an oven (Ml 3:19) and in a symbolic image: The sun of justice (Ml 3:20a).

However, when disasters occur, it is not necessarily that the last day will end. Saint Paul pointed out that mistake of the Thessalonians. Many Thessalonians thought the end of the world would be imminent. Therefore, they just hang around, eating, drinking, and doing nothing and they were chastised by Saint Paul: We enjoin all such and we urge them strongly in the Lord Jesus Christ, to earn the food they eat by working quietly (2Thes 3:12). That was a pessimistic and unrealistic viewpoint.

A number of Christian denominations think in that fashion also. Some Christian denominations predicted the end of the world would come in a particular year of their lifetime. When the year passed by and nothing happened, they proposed another date for the end of the world. Just before we entered the third millennium, people heard sensational news from false prophets and doomsday preachers and spread by the mass media, saying some certain disasters would occur and the end of the world would come in the year 2000. Hearing the news, some people bought and stocked a lot of holy water and many candles in preparation for the end of the world. They rushed to get holy water to sprinkle and to buy candles to light on those days which they thought would be dark days (Jl 2:10; Jl 4:15; Mt 24:29; Mk 13:24). Jesus tells us in today’s gospel: Do not follow them (Lk 21:8).

While we live in the time after the coming of Christ into our human history and before his coming in glory to sum up history, we are not supposed to ignore the present. If we are to be true to ourselves, we must realize that there is still time to grow in faith and in spirituality and to grow in our relationship with God.

With faith, we must consider natural disasters such as earthquakes, hurricanes, typhoons, flood and man-made disasters such as wars, accidents, terrorist attacks, causing destructions in millions of dollars and deaths to thousands of lives as signs, that God might want to tell us something. Perhaps God wants to tell us to prepare our souls ready to come before his judgment throne because we do not know when we have to face death, the final day of our lives on earth.

Prayer for not forgetting to prepare for the last day:

Prayer for not forgetting to prepare for the last day:

Oh Lord our God, you are the beginning and end of all living things.

You hold our destiny in your hands.

Teach me how to prepare my soul before you.

And show me how to live each day

as the last day of my life

so that I may live in grace and peace with you. Amen.