20 Sun. /Ord. C: Following Jesus’ name is the cause of contradiction 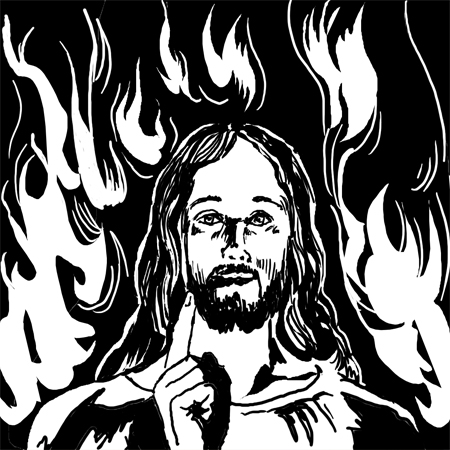 Throughout the history of humankind, people have been using fire for cooking and burning, for shining and heating, for firing and running machines. Fire has different meanings in scripture. Fire in the Old Testament implied God’s presence as Moses saw God in the burning bush (Ex 3:2). Fire was used as God’s punishment when Sodom was destroyed (Gen 19:24). Fire implied the presence of the Holy Spirit, descending on the apostles like tongues of fire (Acts 2:3). On the Easter vigil, the Easter candle is lit from the new fire, symbolizing the light of Christ.

In the Gospel today, Jesus said: I have come to set the earth on fire and how I wish it were already blazing (Lk 12:49). The fire of the Gospel, which Jesus brought, was the cause of opposition and division for many people. He said he had come not to bring peace, but division: Do you think that I have come to establish peace on the earth? No, I tell you, but rather division (Lk 12:51). His words here seem to contradict his mission and his way of life.

When Jesus was born at Bethlehem, the angels sang: Glory to God in the highest and peace to his people on earth (Lk 2:14). When he sent his disciples off two by two, he told them to greet people with a sign of peace: Peace to this house (Lk 10:5). When he rose from the dead, the first thing he said to his apostles was peace: Peace be with you (Mt 28:9; Lk 24:36; Jn 20:19, 21, 26). When he went up to heaven, he promised the apostles peace: My peace I give to you (Jn 15:27). However, in today's Gospel, Jesus said he had come to bring not peace, but division. This seems to be a contradiction to the life of Christ and his gospel, which we are trying to follow. So how can we solve that puzzle? If we understand peace in the human viewpoint, we can see Jesus’ words are contradictory.

Peace in the biblical sense is not to be understood as an absence of war. Peace in the biblical sense is not a compromise with evil and sin. The reading from the book of the prophet Jeremiah tells us the prophet was sent to preach that city would be destroyed because of their sins. Jeremiah was accused of treason for his demoralization of the people.

As a result, he was arrested and imprisoned with his defeatist attitude. Saint Paul in the second letter to the Hebrews told us: In your struggle against sin, you have not yet resisted to the point of shedding blood (Dt 12:4). The implication is that Christians must be prepared to shed blood in their struggle against sin. That is what certain martyrs in the Church did.

From the time of his birth, Jesus became the cause of opposition. At the news of his birth, king Herod, afraid of losing his throne, ordered the massacre of all male infants under two years old (Mt 2:16). When he was presented in the Temple, Simeon prophesied the child would be a sign of opposition (Lk 2:34). His public life of three years was a succession of days being opposed.

Eventually he was persecuted and condemned to death on the cross. So is it that Jesus came to cause a flame of division in the world? In many cases, the opposition came from the own family members. This is the meaning of his message: Father will be split against son, son against father, mother against daughter, daughter against mother (Lk 12:53). Reading the history of the saints will help us understand why members of the same family were split against one another.

There were saints when they chose to live a Christian way of life, when they dedicated themselves and their lives to God, they were opposed sometimes even by their family members. Within a family, one or more members can firmly believe in Christ, and his teachings, while others in the family do not. Thus, as long as one member of a family believes and another does not, there might be a division among them.

Thus, we can see the more closely they follow Christ, the more they were opposed. Why did people oppose when they brought the flame of Christianity to the world? The reason is other people did not want to make efforts to follow the Christian way or did not want to change their lives, or pay the price for being Jesus’ disciples. When we want to follow the way of the gospel, when our Christian way of life is different from that of the world, we will be opposed. Jesus’ teaching and his way of life have brought opposition and division among members of the same family. Jesus’ presence, his preaching and his way of life have disturbed the human mind.

Only when they have dissatisfied with the old self and the present way of life, can they accept his teaching and live according to the way of the Gospel, and consider Jesus as the most important person in their lives. The result of accepting the way of the Gospel is peace. That was what Saint Augustine has experienced when he cried out: Oh Lord Jesus, my heart still be restless, until it rests in you.

Prayer for peace of mind:

Oh, Lord my God, you sent your son

to reconcile humankind with you,

to bring peace to those of good will.

However, why does your message disturb people’s mind?

May I realize by accepting the gospel message

and the Christian way of life,

can I have peace of mind. Amen.