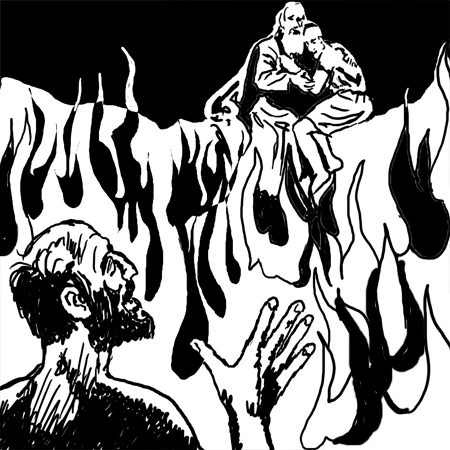 If earthly life is the end, then miserable conditions and difficult situations like poverty, hunger, disease and suffering are men’s misfortunes. If this life is the goal, then we must enjoy life as much as possible: we must strive to eat good food and wear fine clothes; we must seek pleasures to the utmost. However, this life is only temporary. Most people believe in the after-life, except those who are atheists and materialists. If there were no after-life, then many things happened in this life would be unjust, because many good and decent people have to suffer from poverty and hunger, imprisonment and disease. That is why there was a parable in today’s gospel about a rich and a poor man.

The rich man used his wealth to satisfy his selfishness: Dressed in purple garments and fine linen and dined sumptuously each day (Lk 16:19). He denied using his wealth to help the poor and hungry person. He was indifferent to the plight of the destitute. The mistake of the rich man of the gospel was he only used his wealth to satisfy his selfishness. He was condemned not because he was rich but because he was selfish. His selfishness blinded him before the miserable man. The reason for his punishment in the netherworld was that he was not concerned and compassionate for the poor. A group of tourists was travelling overseas. Seeing a restaurant named Netherworld, they went in with curiosity. One of the group asked whether there was any restaurant in the netherworld. Another one shot back: it would be wonderful if there were one down there with food like this.

Contrary to the life style of the rich man was the poor man: Lazarus longed to eat the scraps that fell from the rich man’s table (Lk 16:21). It is noted that the character of this parable should have a personal name Lazarus. The name Lazarus means God helps. In the after-life, Lazarus was blessed and the rich man was condemned. According to the prophet Amos, sometimes man is punished even in this life because of his greed and selfishness. That was the case of those rich people, who were exiled, because they were not concerned about the collapse of Joseph (Am 6:6-7).

Wealth and poverty according to the evangelical spirit depend on our attitude toward material possessions: How blessed are the poor in spirit (Mt 5:3). Thus, the materially rich might be considered poor in spirit if he/she has not acquired his wealth dishonestly, does not put his heart into material goods and is willing to help the poor. On the contrary, the materially poor might be considered spiritually rich if he always dreams to become a millionaire. Thus, to be rich is not a sin. To be poor - just for the sake of poverty - is not a virtue. To be rich or to be poor by itself is not a sin. However, it would be wrong, if we consider earthly goods as an end and purpose of life.

A human being is created with need for material needs for existence and development as a person. However, we cannot let material things hinder our relationship with God. Therefore, the attitude we should have toward material possessions is the spirit of gratitude toward God who gave us everything. According to the divine providence and also the Catholic social teaching (CCC # 2544-2547), material possessions should stir up in us a spirit of gratitude and unite us with one another in mutual responsibility. The best way for showing gratitude toward God is to share our material blessings with the miserable, the suffering and the downtrodden. Wealth is used to serve man, not man to serve wealth. So today, we ask for the grace to know how to steward earthly possessions wisely and responsibly: not to waste, yet not to be selfish. Each one of us, whether rich or poor, or of the middle class, must strive for the evangelical spirit of detached ownership and stewardship and disinterested use of material goods. If not, we may become slaves of earthly goods, and may face unfavorable judgment in the next life. We also reflect and pray asking the Lord to help us to see his image in the hungry, the poor and the sick, the handicapped and the suffering.

Prayer of Agur asking for the grace to know how to use earthly goods [1].

Oh, Lord, two things I ask of you,

deny them not to me before I die:

Put falsehood and lying far from me,

give me neither poverty nor riches;

Provide me only with the food I need.

Lest, being full, I deny you, saying:

Who is the Lord?

Or, being in want, I steal,

and profane the name of my God. Amen.