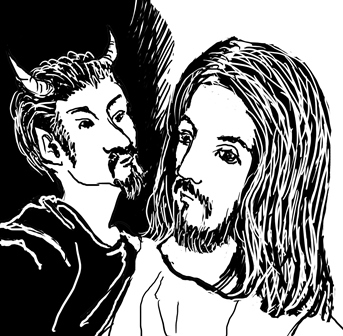 In the desert of Judea, realizing how hungry Jesus was after forty days and forty nights of fasting, the devil tempted him to turn stones into bread for food. There is nothing wrong with this kind of temptation because any hungry person needs to eat. However, it was useless for Jesus to perform this miracle. Jesus could survive in the desert for such a long time of fasting, why should it be necessary for him to use his extraordinary power for his own benefit. In rejecting this temptation, Jesus quoted scripture, saying: Not on bread alone is man to live, but on every utterance that comes from the mouth of God (Dt 8:3; Mt 4:4).

If Jesus yielded to this temptation, he would be subject to Satan’s power. In a beautiful Garden of Eden, the devil did not tell Adam to disobey God directly, but invited him to eat the fruit of the tree of knowledge of good and evil. The Jews at that time expected a messiah to come with great power. Thus, the devil challenged Jesus to live up to the Jews’ expectation by performing a jump from the parapet of the temple to the ground, for, according to the tempter, God's angels would support him. This was a temptation to pride or vainglory. To reject this temptation, Jesus quoted the second book of Deuteronomy, saying: You shall not put the Lord, your God to the test (Dt 6:16; Mt 4:7).

The devil now had a hint that Jesus was the Son of God because he did not say ‘If you are the Son of God’ any longer, when he tempted Jesus the third time. He showed Jesus the world's glory, and promised to give it to him if he would prostrate himself to worship the tempter. Jesus uses scripture to tell him: The Lord, your God, shall you worship and him alone shall you serve (Mt 4:10).

In the three temptations, Satan’s disguise is the exploitation of bread, heavenly protection and worldly possessions to lure Jesus to disobedience to God’s will. Disobedience to the will of God would mean God’s plan of salvation would end. Satan is the devil. He is very devilish. We learn from catechism that Satan was the fallen angel, banished to the netherworld for disobedience to God. Thus, his plan is very subtle. He used an overall plan of temptation, and then attacked opponents in each phase to lure them to his side.

First, Satan took advantage of the moment when Jesus was hungry in order to tempt him to food. Satan could have heard a Vietnamese proverb: Morality comes only after sufficient food and clothing. The reason why saying Satan could have heard this proverb because the devil does not know everything. According to Satan’s scheme, after Jesus had eaten, he would have lured him to show off his power for people to see. Then Satan would tempt Jesus to use his power to govern the nations, which he would promise to give.

Perhaps that is why painters often painted the devil with a long tail because an animal with a long tail is often mischievous like a monkey. A certain Vietnamese priest before going to the US to study asking an American priest in Vietnam about weather in the States. The American responded in Vietnamese: You go there and see, it is cold as the devil. The Vietnamese priest thought the devil is supposed to be in hell, so it must be hot. Now it is strange to hear the American priest said as cold as the devil.

Today we must realize that not every temptation is instigated by Satan. Temptation is usually a symptom of those weak points of our human character. Each day of our lives, we are tempted to put God to the test, to turn away from the true God in order to worship alien gods: god of materialism, god of pleasure, god of science, god of technology, god of superstition.

When we, relying on God’s grace, say no to temptation a few times, it would be easy for us to reject it the next times. To fight temptation, one must be decisive from the beginning. For instance, when we are tempted to watch pornography, and if we have the courage to throw them to the garbage dumpster, next time it would be easy to cope with it. When one intends to buy them, the devil would know because he can see something concrete.

When we have committed the sin of injustice and do not know how to return or feel shameful to return what was stolen, we can return indirectly by using those things not belonging to us to help with works of charity or by putting money taken unjustly into a poor box in any church. Such concrete act should help us to practice the virtue of justice and charity in the future.

As a human being, Christ was subject to temptation and did undergo temptation and he overcame it. That is what Saint Paul tells us in his letter to the Romans of how Jesus conquered sin, destroyed death by his resurrection.

As we begin our journey of Lent, let us spend this forty-day period for more prayers, penance and works of charity to build up our spiritual strength so that we may be able to fight temptation when it comes along. In the desert of soul, with feelings of weakness and sinfulness, it would be easy for us to make decision for survival of soul. Then at mass, the church invites us to pray for ourselves and for others when we pray the ‘Our Father’ together: ‘lead us not into temptation’.

Prayer asking the Lord to deliver us not into temptation.

Lord Jesus, in the desert you are tempted.

You allow temptation to touch those whom you call.

Every day of my life, I was tempted to be selfish,

Forgive me for the times I put myself

in the near occasion of temptation.

Teach me to discipline myself

by fasting, self-denial, sacrifice and prayer

as to build up my spiritual strength

in order to fight temptation. Amen.