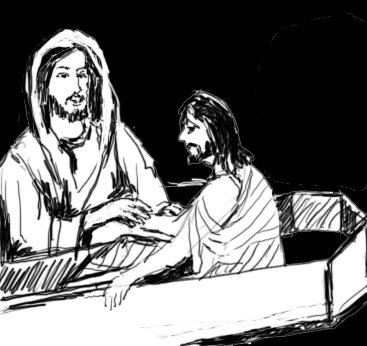 5 Sunday of Lent, Year A

It was published in Vietnamese in the US 2009 and republished in Viet Nam 2012. To keep the author’s writing style, this homily has not been edited and may not be by a hired hand. However, if readers like to point out mistake(s) in spelling and grammar, it would be greatly appreciated by the author whose English is not his mother tongue and who did not live in the US until his adulthood. Passive sentences are used intentionally in this context to avoid using the first personal pronoun ‘I’ when applicable, that might be associated with any idea of egotism, in accord with the French saying, known as: ‘Le moi est haissable’ (The ego is detestable)

Bethany was a village located on the foot of the eastern slope of the Mount of Olives about two miles from Jerusalem. It was the home of Marta, Mary and Lazarus. This brother-sister family seemed to be a rather well to do family. That was why the Bethany house was offered to Jesus and his apostles as the guesthouse where they could have room and board free of charge, each time they came to Jerusalem. Mary could afford to buy a pound of costly perfume made from aromatic nard and anointed Jesus’ feet and dried them with her hair at her home (Jn 12:3). The two sisters could afford the tomb in a cave with a large stone at the entrance for their brother Lazarus.

According to scripture scholars, this Mary of Bethany was not to be mistaken with Mary Magdalene, or the un-named penitent woman, who also brought in a vase of perfumed oil to anoint Jesus’ feet and wiped them with her hair at a certain Pharisee’s house, named Simon (Lk 7:36-50). When Lazarus was ill, the sisters sent word to Jesus notifying him of his illness, knowing Jesus loved their brother. Yet Jesus stayed where he was for two more days. Where did he stay?

According to the gospel of John, he went back across the Jordan to the place where John had been baptizing earlier (Jn 10:40). That place where John baptized was Bethany across the Jordan River (Jn 1:28). Bethany beyond the Jordan River no longer exists. When Jesus arrived, Marta went to meet him saying reproachfully: Lord, if you had been here, my brother would not have died (Jn 11:21). Later on, Mary said exactly the same thing to Jesus if he had arrived early; her brother would not have died (v.32). Their statement implies Jesus was special to them and their brother and they trusted his power to keep his brother from dying or to raise him to life. Yet he failed to show up earlier.

Therefore, Jesus reassured her that her brother would rise. Marta understood and believed that her brother would rise in the resurrection on the last day. Her belief showed that she had a rather good understanding about Jesus’ teaching on the resurrection of the dead. They might have heard that Jesus had raised to life the only son of the widow of Naim (Lk 7:11-16) and the daughter of a synagogue leader named Jairus (Mt 9:18-26; Mk 5:21-43; Lk 8:40-56). In this case, their brother had been dead for four days and had been buried.

So how could he raise him up to life? At that time in Palestine, it was customary to bury a dead person on the same day he died, partly because the climate was hot and there was no way to keep the body from decomposition for a longer period. When Jesus saw Mary and the Jews weep, he became perturbed and was deeply troubled (Jn 11:33). When they showed him the tomb, Jesus wept (v.35).

His weeping suggests Jesus had feeling of a person with a heart touched by the sisters’ grief. On the way to the tomb, Marta said to Jesus there would be a stench by now. Regardless of what she and people thought, Jesus still raised his eyes to heaven in prayer, calling out loud to Lazarus, commanding him to come out.

So what was the purpose of raising Lazarus to life since he had to die once again? For Jesus, to raise Lazarus to life was to glorify God, to make the Jews and the apostles believe that Jesus was sent by God and to comfort Marta and Mary. The Liturgy of the Word for today about the resurrection of Lazarus should stir up some feeling of hope in us even in the midst of Lent when we meditate the passion and death of Jesus.

Yet Jesus' life and ministry cannot be summed up in his passion and death alone. For this reason, in the liturgical celebration, the church always reminds us of the resurrection of Jesus. That is why after the consecration, we all proclaim: We proclaim your death, O Lord, and profess your Resurrection until you come again.

We thank you for creating us with a body and a soul.

May we realize all power of life and death is in your hand.

Grant that people may respect human life including their own.

We pray for those who have died through acts of war and violence,

those who have died: unburied and mourned

that they may find comfort in your mercy.

When you call us from this life,

may we inherit the everlasting life. Amen.