Easter Sun. A: Asking to rise in grace with the risen Christ 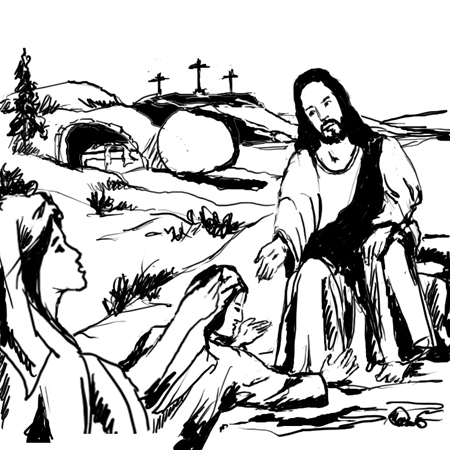 When the guards of the tomb of Jesus were terrified, reporting everything that had happened such as a violent earthquake, the chief priests immediately met with the elders and made their plan of action. They gave a large bribe to the guards with the instructions: ‘You are to say: His disciples came during the night and stole him while we were asleep’ (Mt 28:12-13). Suppose his disciples came and stole his body, or anybody did so, then reported Jesus had risen, then it would be a fraud.

However, there is a question in our mind here. If his body were stolen when the guards were on the watch, then robbers would have to act in a hurry. How could they have enough time to roll up the head cloth and put them in a place separated from the burial cloths? Seeing such signs, John due to his special love for Jesus, possessed a keen intuition of his master’s resurrection. Anyway, we cannot conclude that Jesus rose from the dead on the basis of the empty tomb alone.

The apostles believed in the resurrection not just, because they found the tomb empty, but because Jesus appeared to them, ate and drank with them and conversed with them. According to the gospel of Matthew, Jesus first appeared to Mary of Magdala and another Mary, saying: Do not be afraid. Go tell my brothers to go to Galilee, and there they will see me.’(Mt 28:10).

The apostles then went to the mountain of Galilee and ‘saw him, they worshipped.’ (Mt 28:17). The gospel of Mark tells us: He appeared first to Mary of Magdala (Mk 16:9). Jesus also appeared in another form to two of them, walking along on their way to the country (Mk 16:12). Finally he appeared to the eleven (Mk 16:14). The gospel of Luke tells us about the two disciples on the road to Emmaus, unable to recognize their master at first when he appeared to them, conversing with them.

When they invited the stranger home, Jesus broke the bread during a meal, then their eyes were open and they recognized him (Lk 24:31). The two disciples returned to Jerusalem, seeing the Eleven and were told that Jesus has appeared to Simon (Lk 24:34). When they were still speaking, Jesus appeared to them saying: Peace be with you (Lk 24:36).

They thought they saw a ghost, Jesus reassured them, telling them to observe his feet and hands (Lk 24:36-38). When he ascended to heaven, he let them out as far as Bethany, raised his hands and blessed them (Lk 24:50). Finally, the gospel of John tells us Jesus appeared to Mary of Magdala, calling her by name: Mary (Jn 20:16). Then he appeared to his disciples and said: Peace be with you (Jn 20:19).

Eight days later, Jesus appeared to his apostles and wished them peace, then told Thomas to put his hand into his side and not to be unbelieving (Jn 20:26-27). Afterwards Jesus appeared to his disciples at the sea of Tiberias (Jn 21:1) and gave Peter the responsibility of feeding his sheep (Jn 21:17). We believe in the resurrection because he has done wonders in the apostles.

The apostles were simple folks, mostly fishermen with little education, could not make big plans and strategies to deceive the world. In the courtyard of the high priest Caiaphas and in the praetorian of the procurator Pilate, the apostles were timid like chicken. What was the motive behind the changes in the apostles? That motive was the fact that the apostles saw Jesus after the resurrection.

They touched his body (Lk 24:39), ate and drank with him (Acts 10:41). They received command from Jesus to preach the good news of the resurrection. The risen Lord also appeared to Paul, questioning him: Saul, Saul, why do you persecute me (Acts 22:7), making him change completely. Before, Paul was a fanatic persecutor of Christians. After his conversion, Paul became a zealous preacher of the gospel.

Seeing the risen Lord, the apostles were ready to accept threat and danger on their missionary journey, willing to be persecuted, to be crucified and die on the cross as their master was. According to the Acts of the Apostles: The Apostles were filled with the Holy Spirit (Acts 2:4) and stood up with Peter, addressing the crowd (Acts 2:14), and with power from the Lord, they testified to his resurrection (Acts 4:33), and performed many miracles for people to see (Acts 5:12).

Today not only the Catholic Church celebrates Easter, but also the Christians around world do. Orthodox churches also celebrate Easter but on a different day. Easter is the biggest, the most important feast for Catholics, Protestants and Orthodox Christians. Easter must be the basis of our Christian faith. It is so as Saint Paul wrote: If Christ has not been raised, our preaching is void of content, and your faith is empty too (1Cr 15:14). Based on the words of Saint Paul, we can say further: If Christ has not risen from the tomb, my preaching is in vain. If Christ has not risen from the dead, your listening to me is a waste of time.

A prayer for rising in grace with the risen Christ:

I was reminded to live the spirit of lent

by prayers, fast, abstinence, sacrifice and self- denial

along with works of charity.

I also was advised to die to sin and vices

such as greed, selfishness, infatuation, laziness, pride and hate

by confession, act of contrition and penance.

Now I desire to rise again in grace with you

so that I may experience the presence of your risen life. Amen.