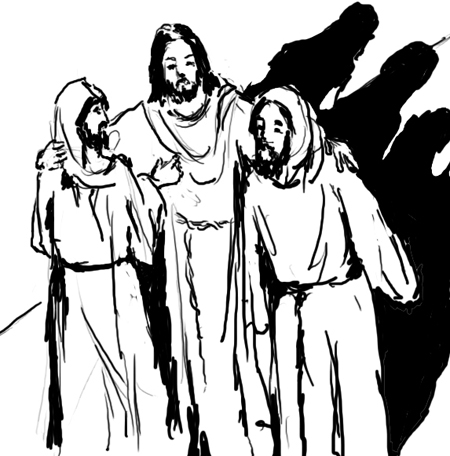 3 Sunday of Easter, Year A

The passion and death of Jesus on the cross was a heavy blow not only to the apostles, but also to his disciples. On that Sunday morning, two disciples abandoning their calling,

returned to Emmaus, seven miles from Jerusalem. Although Jesus had told them about his impending death and resurrection, they still did not understand.

The two disciples on the road to Emmaus tried to search scripture for some explanation of the Good Friday tragedy. Along the way, someone came along, conversed with them saying: Did not the Messiah have to undergo all this so as to enter into his glory? Then beginning with Moses and all the prophets, he interpreted for them every passage of scripture which referred to him (Lk 24:26-27).

They travelled several miles with Jesus to Emmaus, conversing with him, yet they did not recognize him. The reason for that is they had their own idea about the messiah. Perhaps they thought from now on there would be no hope for a possible position in his kingdom.

They locked themselves in self- pity at the crucifixion of the Lord on Good Friday.

Their sadness and despair so clouded their minds that they could not transcend themselves. The situation that made the disciples unable to recognize Jesus was similar to the situation when Mary of Magdala and the apostles did not recognize the risen Lord at first (Jn 20:14; Jn 21:4; Lk 24:37). Why was that so? The first reason was the apostles did not expect with faith his resurrection as Jesus had predicted. The second reason according to Saint Mark was when appearing to the apostles/disciples: He was revealed to them completely changed in appearance (Mk 16:12). Certainly, the changed appearance was not because he was unable to eat for three days and thus lost his weight. Saint Paul explained the difference in Jesus’ resurrected body as follows: A natural body is put down and a spiritual body comes up (1 Cor 15:44).

Jesus’ conversation with them on the road made their hearts burning (Lk 24:32), yet they failed to recognize him until they invited him to their home for an overnight stay. At the meal when he took bread, gave thanks, broke it and gave it to them (v.30), then their eyes were open and they recognized him. Immediately they returned to Jerusalem to inform the apostles of the master’s resurrection and appearance to them. They found out the apostles were also convincing of Christ’s resurrection.

Among the eleven apostles, there was Thomas who was skeptical of Jesus’ resurrection when the other apostles told them about their master’s resurrection. Jesus had to appear directly to him so that Thomas could see the nail-marks in his hands and put his hand into his side. Among seventy-two disciples, there were Cleopas and the other disciple who were also unbelieving in their master’s resurrection, when Mary of Magdala and some other women announced to them that they found the tomb empty and that an angel of the Lord appeared to them and told them about Jesus’ resurrection. The risen Christ had to appear to them on the road to Emmaus, interpreted to them those scripture passages referred to him.

Preaching the risen Christ was so essential a message at the early church that Christ did not want his apostles and his disciples to be doubtful of his resurrection. That was why Jesus let Thomas examine the nail-marks in his hands and the wound at his side so that he could be able to express his powerful profession of faith: My Lord and my God (Jn 20:28). Recognizing the risen Lord at the breaking of bread, the two disciples on the road to Emmaus ‘set out at once and returned to Jerusalem where they found gathered together the eleven and those with them’ (Lk 24:33) so as to share the joy of his resurrection.

Perhaps we have faced situations similar to that of the two disciples. Did we ever doubt God’s presence in our lives? Were we afraid of dark future? Were we desperate about corrupt practices in society and scandals in the Church? When we face winds and storms of life, our minds are clouded that we are unable to recognize God’s presence and his footprints. When we are burdened with anxiety and worry, doubt and confusion, fear and despair, we cannot go beyond ourselves. In order to be able to recognize God’s presence, we need to eliminate those obstacles from our lives and open our minds and hearts to the spiritual and supernatural domain. We need to be attentive to the word of God and the Eucharist. Every day of our lives, we are surrounded by the footprints of God and his works of creation. We need to teach ourselves to be aware of his presence.

A prayer for being aware of God’s presence:

O risen Lord, we thank you for your coming into the world,

to suffer and die on the cross for our sins

so as to save us from the condemnation of the original sin.

We thank you for your promise

to remain with us until the end of time.

Free me from anxiety and doubt, confusion and fear

so that I may be aware of your presence in my life,

in the scripture I read, in the sacraments I receive,

in the poor, the sick, the lonely and the suffering,

and may be sure to go forward in your presence. Amen.