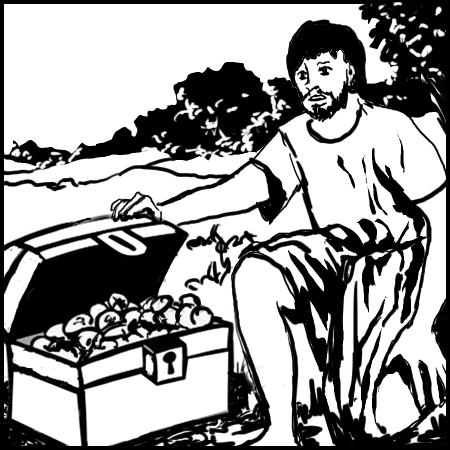 Most adult people wish to be happy. Yet they disagree with one another about how to attain it. Some people go and seek wealth so that they can be happy. To wish is one thing, but to choose in another. We can wish to have many things, but cannot choose all. We can choose only one or a few.

Facing different choices, King Solomon did not ask for longevity, wealth, or vengeance against his enemies. King Salomon realized that he could not understand everything with his own mind and he did not have enough experience in order to govern his people. Thus, he asked God for a gift of wisdom and understanding so that he could distinguish right from wrong, good from evil. The King also asked for sound judgment so that he could guide and govern his people. This is what he asked: Give your servant, therefore, an understanding to judge your people people and to distinguish right from wrong (1Kgs 3:9).

As a result, God showed his kindness towards Solomon. He gave him a wise and understanding heart so that he could remain to this day a figure of wisdom that so many people would admire him: I give you a heart so wise and understanding that there has never been anyone like you up to now, and after you there will come no one to equal you (v. 12). It was Solomon’s wisdom, which Queen of Sheba sought to learn as it is written in the Gospel: At the judgment, the queen of the South will rise with the present generation and be the one to condemn it (Mt 12:42).

The parables of today tell us the different reactions when people found something very valuable. To tell parables is difficult because if application is not appropriate and realistic, then it is like to put a man’s beard into a woman’s chin. In the four Gospels, Jesus tells many parables and his parables are excellent, interesting and meaningful. Jesus uses images like fields, wheat, grass, flour, birds and sheep familiar to his hearers as to teach them a moral lesson. When telling a parable about a man who finds a treasure buried in a field, Jesus said a farmer decided to sell his property in order to buy that treasure. At that time in the region where Jesus was born, Palestine had been occupied subsequently by the Babylonian, Assyrian, Persian, and Greek and Roman empires. Therefore, burying treasures underground was not rare. According to the Roman law at that time, whoever finds anything valuable underground was his. The Jewish law taught whoever an owner of a field is, is the owner of treasures in the field.

When a farmer finds a treasure buried in a field, he goes and sells his property in order to buy the field. Jesus wants him to keep the Jewish law. Also in the old days in Israel, diamonds and precious stones were unknown. That is why fine pearls were considered as great value. Thus, when a merchant finds a fine pearl, he also goes and sells everything he has to buy the pearl. When a fisherman hauls a net full of fish to the shore, he has to make a choice. He has to collect and keep what is good, and to throw away what is undesirable.

The second Vatican Council states: Though mankind is stricken with wonder at its own discoveries and its power, it often raises anxious questions about the current trend of the world, about the place and role of man in the universe, about the meaning of its individual and collective strivings, and about the ultimate destiny of reality and of humanity (Gaudium et Spes # 3).

Man of today has to face a crisis in values which humankind has not faced. The aged feel those traditional values are shaken and uprooted. The biggest single problem of today is how to find meaning and purpose in life. Unable to find meaning and purpose in life might bring man to ruin. God gave Solomon wisdom because he had chosen the right priorities of values in life. The fact that we choose will exert influence on our children and grandchildren’s choice. In the Gospel Jesus himself tells us: Seek first the kingdom of God and his ways of holiness, and all other things will be provided later on (Mt 16:33).Those are treasures which Jesus tells us: Neither moths nor rust corrode nor thieves break in and steal (Mt 6:20).

A prayer for the grace to find the right priorities of everlasting values:

Oh, Lord our God! You are the wise and transcendental.

Your wisdom surpasses all kinds of our human wisdom.

Open our eyes so that we may see things in the light of truth.

Give us the grace so that we may seek and choose

the right priority of values in life,

the values of the heavenly kingdom

as to have influence on our children’s choice. Amen.