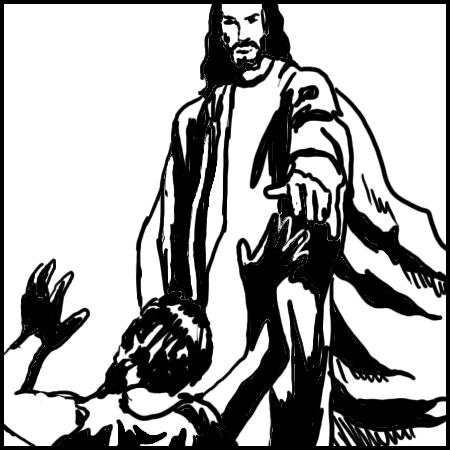 The Sea of Galilee, also called the Sea of Tiberias or the Sea Lake of Gennesareth is thirteen miles long, and eight miles at the widest in a pear shape. It lies about seven hundred feet below sea level and over two hundred feet at the deepest. Usually the surface of the Sea is calm. Sometimes turbulent wind currents blow up suddenly from the mountains and churn the water into turbulence.

Being aware that the crowds wanted to make him their king (Jn 6:15) after the miracle of the loaves, Jesus decided to dismiss the crowds and tell the apostles to get into a boat and to precede him to the other side of the lake. Then, he went up on the mountain by himself to pray because he did not want to have anything to do with their secular scheme. Today's Gospel tells us when the Apostles just sailed offshore, the water turned very rough. During the fourth watch of the night, they saw somebody walking on the water toward them. They were terrified, thinking it was a ghost.

Jesus immediately reassured them: It is I. Do not be afraid (Mt 14: 27). Peter, as we know from the Gospel account, is a quick-tempered man and a man of action. When he just heard Jesus' voice, he demanded to come to Jesus on the water. However, when he felt how strong the wind was, he became frightened. Beginning to sink, he cried out: Lord, save me (Mt 14:30). Jesus stretched out his hand and caught him. Peter and the Apostles were not the only ones to experience fear. Elijah the prophet as we learn from the first Book of Kings today was also in a fearing situation. He tried to hide in a cave when idol-worshipping queen Jezebel was seeking his life.

Saint Paul was in sorrow and torment because his fellow Jews rejected the gospel of Jesus that he brought to them. As the apostles feared for their safety in the stormy Sea of Galilee, Elijah feared for his life in his persecution and Paul feared that God would condemn Israel, we also have experienced similar fears. So many people are fearful of so many things. We are fearful of war and terrorism, fearful of accident and violence, fearful of disease and sickness, fearful of criticism and ridicule, fearful of robbery and murder and death.

We have been buffeted by storms of life: by sorrow and pain, by stress and pressure, by anxiety and worry, by depression and rejection. Many of us have undergone heavy temptation and crisis of faith in our lives. When South Vietnam fell under the communist North in 1975, hundred thousands of Vietnamese boat people took to the sea in small boats to escape. They ran out of food, water, and fuel; they confronted with high wind, waves, and pirates. And they cried out to God for help. God saved them. A number of them perished not because they did not pray. They did pray asking God to save them and their soul if they would die.

In times of troubles told in today’s scripture readings, God came to help and give them hope. When Elijah was hiding in a cave, God said to him in a tiny whispering sound and gave him a mission to do. Saint Paul was in anguish, but he put trust in God and God revealed to him one day he would draw his people to Christ. When the boat of the apostles was being tossed about by the waves, for the wind was against it (Mt 14:24-25),

Jesus came down from the mountain, walking toward his disciples on the sea to watch over them and rescue them.

Peter was terrified because he thought he saw a ghost. When he felt the force of the wind, he became frightened and began to sink when he doubted and called to Jesus to save him.

Yet, Jesus complained: Why did you doubt (Mt 14:31)? Jesus’ point is that Peter should have turned to God for help in all the circumstances of life, not just in crisis, not just in desperate situation when the violent wind and high waves blew and pushed against his boat. This is a lesson for all of us too. Jesus wants our prayer to be a habitual part of our lives. He wants us to turn to him in prayer in all the circumstances of our lives and to put our trust and faith in him as a child does in his or her parents.

Once there was a group of priests making a pilgrimage to the Holy Land. The traveling agency rent a boat, taking them to the middle of the Sea of Galilee in a late evening. Then the captain of the boat turned off the engine. One of the priests carried a bible with him. He opened the gospel passage of today and proclaimed it to everyone to listen to and ponder. According to the travelling priests, it was so touchy when they imagined the scene of Jesus walking on the water and the miracle he made to calm the water, and how he saved Peter from sinking, and how he reassured the apostles: It is I; do not be afraid (Mt 14:27). In a calm atmosphere, God's word came alive in their heart.

A prayer asking the Lord to save us:

O God, your strength and power are over all creation.

My life is like a boat floating on the sea.

Sometimes it is smooth sailing;

other times confronted with violent storms and waves

and even with undercurrents and hidden rocks.

I ask you to come into my boat of life

as you got into the boat of the apostles

to calm down the wind, the storm and the wave.

so that I may reach my port safely. Amen.