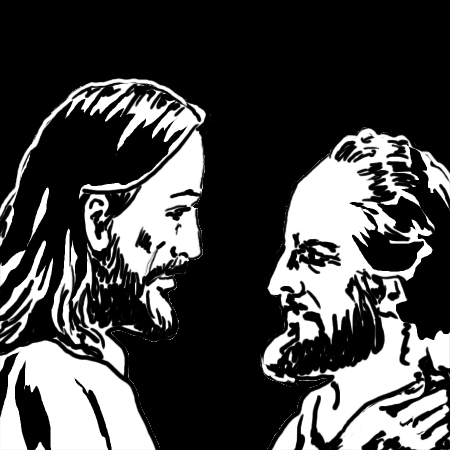 It was published in Vietnamese in the US 2007 and republished in Viet Nam 2010. To keep the author’s writing style, this homily has not been edited and may not be by a hired hand. However, if readers like to point out mistake(s) in spelling and grammar, it would be greatly appreciated by the author, whose English is not his mother tongue and who did not live in the US until his adulthood. Passive sentences are used intentionally in this context to avoid using the first personal pronoun ‘I’ when applicable, that might be associated with an idea of egotism, in accord with the French saying, known as: ‘Le moi est haissable’ (The ego is detestable).

Rock often carries with it rich meaning in Scripture. Rock stands for firmness and stability. That is why Jesus told his disciples to build their house on rock so that when the torrents come and the winds blow and buffet the house, it can stand firm. When Simon Peter followed Jesus to be his apostle, Jesus changed his name from Simon to Cephas or Peter which means rock. He promised to make Peter the foundation stone upon which he would build his church.

The Gospel today tells us how Jesus handed the keys of power to Peter: I will give you the keys of the kingdom of heaven. Whatever you declare bound on earth shall be bound in heaven; whatever you loosed on earth, shall be loosed in heaven (Mt 16:19). The key in the biblical sense is a symbol of responsibility and authority. Those who carry the key has authority to decide who can enter and cannot as the key of the house of David was given to Eliakim who was summoned to guard the palace (Is 22:22). Thus, the keys entrusted to Peter symbolize authority or leadership.

It would be helpful to appreciate the authority of Peter, if we look at the situation, in which Jesus gave the power of keys to Peter. It was the moment of Peter’s recognition of the divinity of Christ: You are the Christ, the Son of the living God (Mt 16:16) that Jesus gave him the power of keys and it was in that moment that the apostles were united. Peter's profession of faith in the Messiaship of Jesus is a divine revelation, not a human understanding. That is why Jesus said to Peter: You are a happy man, because it was not flesh and blood that revealed this to you, but my Father in heaven (Mt 16:17). Peter's understanding of Jesus at that time was still limited. That’s why when Peter tried to dissuade Jesus from going to Jerusalem to suffer and die, Jesus scolded him, calling him Satan, because he was not judging by God’s standards, but by man’s (Mt 16:23). Peter’s faith was still fragile when he denied Jesus 3 times (Mt 27:69-75) and was needed to be strengthened.

With experience, Peter dared not pride himself as before, but proclaimed his love for Jesus three times as if to compensate for the three-fold denial. This time Jesus told him to feed his lambs (Jn 21:15) and his sheep (v. 16), including his brother apostles and the entire Church which he would institute. When Jesus predicted Peter would deny him, he also predicted Peter would return, and reminded him of supporting his brother apostles (Lk 22:32). Jesus’ above words imply the role of leadership of Peter.

Peter was considered the natural spoke-man for and leader of the twelve whenever the occasion arose. Peter took the initiative to speak in the name of the apostles on Pentecost Sunday (Acts 1:15-20; 2:14:16). He received Jewish and pagan converts through baptism (Acts 2:38). He recommended that one of their company should be chosen to replace Judas (Acts 1: 21). He defended the other apostles (Acts 4:8-12) and to convene and preside over the first Council of the Church in Jerusalem (Acts 15:7-11). It was Peter, who founded the Church in Rome as his apostolic see and reigned as its bishop. Therefore, the bishop of Rome today is regarded as his successor as pope in the Catholic Church. Reading the New Testament, we can see Peter who writes his Epistle with authority of the leader.

Christ founded the Church by choosing twelve apostles and appointing Peter to be their leader and gave them authority. Its purpose was to keep the faithful in the unity of faith and fraternal communion (Lumen Gentium # 18). Thinking over and over, we have realized that God’s way is the way of wisdom and knowledge as Saint Paul pointed out: How deep are the riches and wisdom and the knowledge of God (Rom 11:33).

Throughout the history of the Church, we can see the supremacy of the pope has been a topic of conversation and a cause of dispute and controversy, and has led to division. History has proved that when people left the Church which Christ had founded: one, holy, catholic and apostolic Church (Nicene Creed), they would continue to divide into different denominations when they were in disagreement on theological and moral issues.

That is why today we can see there are so many different Christian denominations, all claiming to follow Christ faithfully. There have been cases when people left the Church to form different denominations due to personal ambitions, unbalanced judgments or disobedience to authority in the Church.  Christ gave authority to the apostles so that they could serve others. Jesus might have chosen to deal with each person directly without human mediation. However, he wanted human beings to corporate with his plan of salvation, and he appointed them to guide the Church. They still carry within themselves weakness and sinfulness. Therefore, the Church has undergone difficulties: with abuses and mistakes made by members of the church. As long as the Church is still on earth, the pilgrim church always seeks the truth and purifies itself from error and abuses.

A prayer asking for the grace to remain in the church:

Oh Lord Jesus, we thank you for coming down from heaven

to establish the Church on the foundation of the apostles

with Peter their leader.

You also prayed for the apostles to be united.

Grant that Christian denominations may discover their roots

as to seek unity with the Church which you instituted.

Grant that I may become an instrument of unity

in my conducts, speeches and writings

as not to cause confusion and division in the Church.

May I live and die as a member of your Church. Amen.