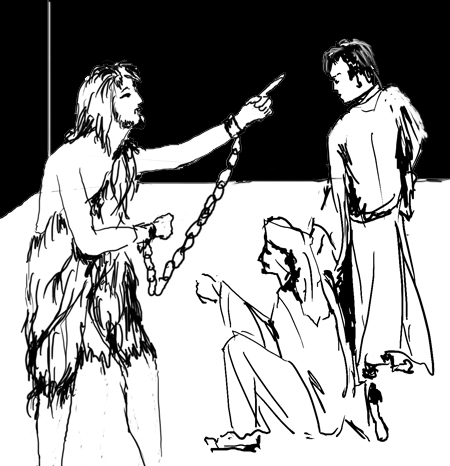 3 Sunday of Advent, Year A

In a nation, which is filled with social and moral problems such as injustice, corruption, unemployment, shortage of food, high cost of living, and social unrest and so on, then people would lose faith in their government. The Hebrew nation at the time of Jesus was a nation filled with many social ills and problems. Their nation was occupied by the Romans, a foreign power. Internally there were divisions between political and religious factions. Their puppet King Herod led the immoral life by taking his brother's wife.

John's question to Jesus means something like this: are you the one who is to come to eliminate social ills, injustice and evil in the society? It is strange that previously John had talked to his disciples about Jesus: I am not worthy to carry his sandals. He it is who will baptize you in the Holy Spirit and fire (Mt 3:11). When he saw Jesus, John the Baptist introduced Jesus to his disciples: There is the Lamb of God, who takes away the sin of the world (Jn 1:29). Yet today John the Baptist sent his disciples to ask Jesus whether he was the one who was to come. So did he pretend to ask? Did he doubt the divine mission of Jesus? Alternatively, was he too anxious, no longer patient enough to wait for the Messiah to come to punish those evil doers? If his hidden intention was so, then his question meant to urge Jesus to act. Jesus did not answer yes or no. He did not confirm or deny the title of Messiah. Here was Jesus' answer to John's question: Go back and report to John what you hear and see: the blind recover their sight, cripples walk, lepers are cured, the deaf hear, men are raised to life, and the poor have the good news preached to them (Mt 11:4-5). That was the good news of the messiah to come.

The reading from the Book of the prophet Isaiah was written at a time when life in Israel was miserable. Expelled from their own land, the Jewish people had no idea when and how to begin to rebuild their lives. Yet Isaiah's own experience of being close to God gives them hope. He shared that vision of hope with his contemporaries in writing. That is also the vision shared by Saint James in his epistle today. Saint James tells us: Make your hearts firm, because the coming of the Lord is at hand (Jas 5:8). So the prophet Isaiah and Saint James could see beyond the chaos to a bright and renewed future.

Looking into our own situations, we may wonder whether we face similar problems of life as the Hebrew people did at the time of Jesus. We all have problems in our lives: personal problems, health problems, marital problems, family problems, social problems, and church problems, job related problems and so on. It is so easy to be bogged down in the chaos and problems in our lives. In difficult and confusing times, we can raise questions similar to John’s questions. Is the Lord the one who can free us from sickness, disease and suffering? Is the Lord the one who has power to heal emotional wounds between husband and wife, parents, brothers and sisters and children?

Prayer for putting faith in the Savior about to be born:

Oh! Savior about to be born!

Impossible, I will not seek any other god.

But will put my faith and trust in you alone

Come and free me and save me. Amen.