2 Sun. / Lent, A: Following Jesus to the mountain of soul 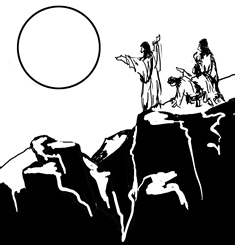 2 Sunday of Lent, Year A

In the prospect of his passion and cross, Jesus took Peter, James and John to a high mountain to show them the glory of his kingdom. Even though the apostles had followed Jesus for three years, listening to his teaching and witnessing his miracles, they still had the wrong idea about the messiah and his mission. They still hoped the messiah would establish an earthly kingdom: rich and strong, capable of overthrowing the Roman rule. The three apostles whom Jesus took to the mountain for the transfiguration showed different characters and qualities.

Peter, even though with a hot temper, quick to speak, showed leadership ability, capable of uniting the other apostles. James was strong in faith. John was full of love. Yet these three apostles also would witness Jesus’ agony in the garden of Gethsemane. Lest the passion and cross of Jesus would give them a painful experience, Jesus took them to a high mountain and was transfigured before their eyes so that they could see his glory and the glory of his kingdom.

His transfiguration was to strengthen their faith and hope in the prospect of the Good Friday. The apostles’ reaction to the transfiguration is worth of our attention. At first, they were fascinated by the glory of God’s kingdom, wishing to treasure the experience by asking to stay on the mountain.  That is why Peter exclaimed: Lord, it is good that we are here (Mt 17:4). They also saw Moses and Elijah at the scene of the transfiguration. Then they heard a voice from the cloud saying: This is my beloved Son, with whom I am well pleased (Mt 17:5). In the Old Testament, a cloud was considered the symbol of God’s appearance to his people.

It is noted here that the voice heard from the cloud when Jesus was transfigured is the same voice heard from the sky when Jesus was baptized by John (Mt 3:17). Thus, the voice from the cloud showed the apostles that their master is the Son pleasing to God in the fulfillment of his Father’s will. What is about the presence of Moses and Elijah at the transfiguration? According to the Jewish tradition, Moses was considered the gathering and unifying author of the Pentateuch, representing the Law and Elijah, the greatest prophet in the Old Testament, representing the prophets. Thus, their presence was intended to help the apostles realize that Christianity to be founded by their Master would not be separated from what was written in the Old Testament.

Thus, the three realities of Jesus’ Transfiguration: his dazzling face, the presence of Moses and Elijah and the voice spoken in the cloud are aimed to help the apostles realize the agony and cross of their master would not be a failure, but a transformation, and thus they would be able to keep their faith firm. In the garden of Gethsemane, Peter just drew his sword to cut off the right ear of the high priest’s servant in defense of his master. Yet, in the courtyard of the high priest’s residence, Peter was timid like a chicken. He denied Jesus three times, denying all connections to Jesus.

When he heard a cock crowed, remembering Jesus’ word, he went outside and began to weep bitterly (Mt 26:75).His tears flowed out as if he was saying: Master, how could I deny you as such when I myself did ask your permission to erect three tents on the mountain to contemplate the glory of the Kingdom. Happy is Peter! His tears of repentance moved Jesus to forgive his sin. We are now in the second week of Lent. Lent is a time when Christians need to take spiritual exercises to follow Jesus to the mountain of our soul as to be transfigured in smaller scales.

In order to be able to stand firm in time of trials and tribulations, the Christians need to have the experience of loving transactions between God and human soul. The apostles were fascinated and immersed by the glory of the transfiguration, and then at least we Christians need to ask God to touch our lives or ask to have what is described in mystical literature as ecstasy, rapture or levitation.

To attend a good retreat, to witness virtuous examples, to hear lofty thoughts can make us eager for call to holiness. To hear an inspiring sermon can ignite the fire of our love for God, impelling us to eliminate obstacles from our lives. Seeing good examples of sacrifice and charity can make us want to serve the poor, the sick and the suffering.

It is so encouraging and consoling for us to know that someday we will share in Jesus' glory, the glory of the transfiguration.  Peter in his moment of excitement, asked Jesus to stay on the mountain in order to contemplate the glory of God. However, Jesus told him he would have to go down the mountain again to bear witness to the Lord, to suffer and die with the Lord first, before he could go up the mountain again. That is the way of Jesus: through the cross to the resurrection, through suffering to glory. To be Jesus' disciples, shall we take a different way, or shall we, or must we follow the way of the Lord?

Prayer asking for contemplating the glory of God’s kingdom:

Oh Lord Jesus whom I adore.

You took the three close apostles to the mountain

to show them the glory of your kingdom.

so that I may be confident to walk with you. Amen.