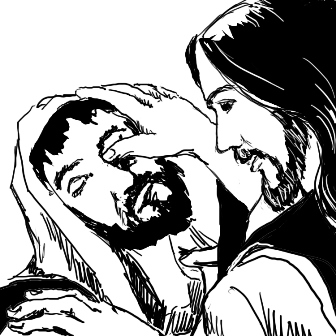 4 Sunday of Lent, Year A

At the time of Jesus on earth, many of the Jews, influenced by Plato’s philosophy, believed that physical suffering was considered as some sort of punishment from God in retribution for a person’s sin or the sin of his/her parents. This idea is similar to the Vietnamese proverb: Father has eaten salty food, his son is thirsty. The above Vietnamese proverb is also similar to the proverb, which was recited in Israel: Fathers have eaten green grapes, thus their children’s teeth are on edge (Jer 31:29; Ez 18:2).

In the books of Jeremiah and Ezekiel, God uses the mouth of the prophets to question his people why they still recite in the land of Israel that proverb and teaches them each generation is responsible for its actions (Ger 31:30; Ez 18:4). The implication of the Jewish proverb only applies to some hereditary diseases based on physiological causes.

Still in today’s Gospel, the Pharisees raised their voice accusing the blind man of sinfulness, either his or his parents. Even Jesus' disciples believed that the man was born blind because of his sin or his parents' sin. Raising his voice, Jesus said the man’s blindness since birth was not caused by any body’s sin, i.e., Jesus rejected the causal relation in this case. In other word, the Jewish proverb in Jeremiah and Ezekiel’s cannot be applied to the blind man from birth.

Then Jesus mixed clay with his saliva and smeared it on his eyes, and told him to go and wash it in the pool of Siloam. In ancient times, saliva was used by physicians both from the East and the West to cure disease. However, to mix saliva with mud seemed to be strange and unsanitary. Yet, feeling lost and sad due to his being unable to see, the blind man was willing to corporate with Jesus’ way of healing.

After having been healed, a dispute broke out concerning how the blind man was healed. The main role was now played by the blind man. Those who played supporting roles are his neighbors, the Pharisees, the Jews and the blind man’s parents. Jesus temporarily withdrew to backstage in order to reappear on the last scene. Among his neighbors, some were surprised at how he was healed; some thought it was not him, but somebody else. The healing was taken place on the Sabbath, a day off work. Therefore, some Pharisees asked how the blind man was healed. Others said Jesus could not be from God because he did not observe the Sabbath. Still others objected saying how a sinner could do such signs. At this time, a group of Jews entered the scene. They double-checked with the blind man’s parents to find out if he was their son and how he was healed?

His parents said their son was old enough to answer that for himself. In fact, they did not want to testify to their son’s healing because they were afraid of the Jews who opposed anyone proclaiming Jesus as the Christ. The Jews again accused Jesus of sinning on the Sabbath. The blind man’s obvious response made the Jews dumbfounded: ‘It is unheard of that anyone ever opened the eyes of a person born blind. If this man were not from God, he would not be able to do anything’ (Jn 9:32-33).

The Jews could not find any reason to reject the simple, yet obvious answer of the blind man. In retaliation, they expelled him from the synagogue. After he had been expelled, Jesus sought him out and said to him if he would believe in the Son of Man. The blind man responded: ‘I do believe, Lord’ (Jn 9:37). The process of his profession of faith underwent three stages.

First he saw Jesus as a man, whom people called Jesus (Jn 9:11), then he recognized Jesus as a prophet before the Pharisees (Jn 9:17), and finally he proclaimed Jesus as from God before the Jews (Jn 9:38). The attitude of the blind man was different from that of the Pharisee. Even though the Pharisees and the Jews acted bossy and threatening, the blind man appeared calm in rebutting their reasoning and accusations. He also showed courage in proclaiming his faith in Jesus as the Christ without fear of being expelled from the synagogue.  For the Pharisees, they could see the blind man’s eyes restored to sight, but they did not recognize Jesus’ work as from God.  They did not realize that Jesus is also Lord of the Sabbath. They also did not know that good works need to be done even on the Sabbath.

Today the book of the prophet Samuel gave us an example of how erroneous human judgment was. Samuel was sent by God to anoint one of Jesse’s sons to be king. When looking at the appearance of Eliab, Samuel thought it was he to be anointed. However, God said to Samuel: ‘Not as man sees does God see because man sees the appearance but the Lord looks into the heart’ (l Sm16:7). God wants to share with us his authentic way of seeing and judging things as St Paul told us in his letter to the Ephesians: ‘You were once darkness, but now you are light in the Lord. Live as children of light’ (Eph 5:8).

A prayer for the light of faith:

we thank you for the gift of sight

and the light of faith we received at baptism

through our parents and god-parents.

Teach me to see things in the light of faith.

grant that I may realize that I am blinded.

To be reflected by the supernatural light from on high,

I can walk in the light of faith. Amen.