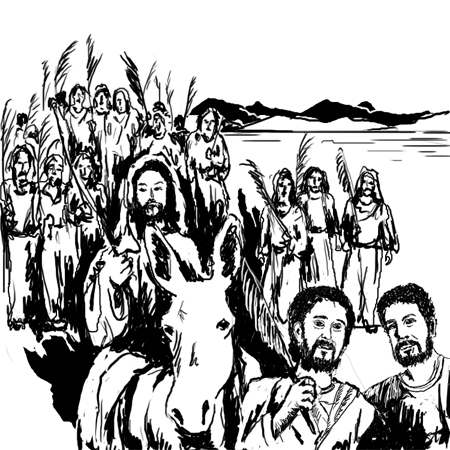 Palm Sunday, which we are celebrating today, is Jesus’ triumphant entry to the city of Jerusalem. His being welcome to Jerusalem was a short-lived glory in his earthly life. The people carried palm branches and praised him: Hosanna to the son of David; blessed is he who comes in the name of the Lord (Mt 21:9). They were enthusiastic in welcoming Jesus, for they hoped he would set up a secular kingdom, nationalistic and political.

Although the people were enthusiastic in welcoming him and acclaiming him king, they missed the point. Their intention was they wanted a messiah to help them fight the Romans, making their country rich and strong, capable of driving out the Roman rule. However, when they realized Jesus did not fit into their notion of what a messiah should be, they were ready to crucify him. Therefore, there was another event followed, that is the event of Jesus’ passion. That is why today, the Church has the Passion of Christ proclaimed.

It has been learned that after victory, a king or a general returned in his glorious day, rode on an elephant to the city with an imposing bearing. Jesus chose to enter the city of Jerusalem on the back of a donkey. Donkey is a docile animal. Thus, by choosing a donkey as a means to enter the city, Jesus wanted to express his willingness to obey the Father’s will. As a servant does his master’s will, Jesus identified himself with the faithful servant of Yahweh who was sent to do his Father’s will? As a servant says ‘I gave my back to those who beat me, my cheeks to those who plucked my beard; my face I did not shield from buffets and spitting (Is 50:6), Jesus was willing to let the crowds spit on his face and hit him (Mt 26:67) and make a fool of him (Mt 27:31). Even though he is God, yet obeys the will of the Father, takes our human nature, suffers, and dies on the cross as a ransom for many.

Therefore, the purpose and mission of the messiah is to do God’s will: My Father, if it is possible, let this cup pass me by. Still let it be as you would have it, not as I (Mt 26:39). Saint Paul in his letter to the Philippians tells us about Jesus: He humbled himself, becoming obedient to the point of death, even death on a cross (Pl 2:8). Today each one of us needs to ask, how I have lived according to the will of God?

We are like people in today’s gospel when we want religion to change according to our wish, tendencies and interests. Today we are entering the Holy Week. Holy Week is the most important week in the history of salvation, also the most important week in the liturgical year of the Church. In the Holy Week, the Church celebrates the mysteries of salvation, which Jesus accomplished in the final days of his life on earth, from his triumphant entry to the city of Jerusalem to his passion and death on the cross.

In the Holy Week, we reflect our faith experiences: faithful or unfaithful to God. Holy week is a time to find out our weakness and our sins. Am I like Judas or Peter? If we are true to ourselves we have to realize sometime we are like Judas when we sinned, refusing God’s grace.

At other times, we are like Peter when we do not want to show that we are Catholics, for fear of being ridiculed.  Jesus is about to suffer and die for our sins. How and what can we do to return for his love? On Holy Thursday, we commemorate the institution of the Eucharist for our spiritual nourishment. In order to continue the Eucharist, in order to do it in remembrance of him, Jesus also instituted the priesthood, and washed the feet of the Apostles as a symbol of service. So the Eucharist and the priesthood are inseparable because there can be no Eucharist without the priest. On Good Friday, we commemorate Jesus' death on the cross for our salvation. On Holy Saturday, we continue to reflect the suffering and death of the Lord in anticipation of his resurrection.

A prayer for living according to God’s will:

O Lord our God, your way is the way of wisdom and righteousness.

However, I do not know what you want me to do.

Enlighten my mind so that I may find your will:

through prayers, listening and reflection.

Give me courage and perseverance in following your will

I can be sure to go forward in peace. Amen.