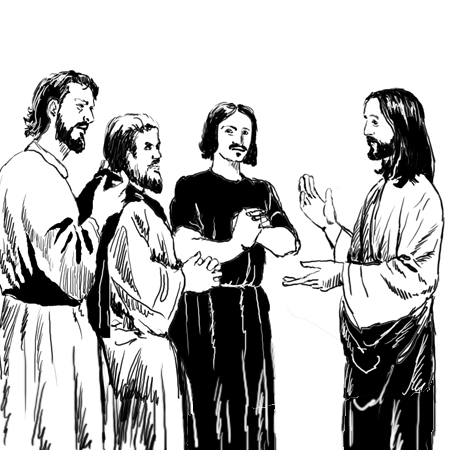 Each of the above views is correct, yet only partly correct on a different aspect. As far as one does not have a total look at Jesus, as long as one has not read the whole Gospel or at least a big part of it, it would be easy for one to impose a wrong name or a title on him. When one sees Jesus defectively as such, it would be easy for one to distort the person of Jesus and explain his works wrongly. For instance when Jesus ate and drank, he was labeled as a glutton and drunkard (Mt 11:19; Lk 7:34). When Jesus advised sinners, he was labeled as liking to associate with sinners and prostitutes. In today’s Gospel, when the scribes saw him use his power to expel demon, he was labeled as: Beelzebul possesses him (Mk 3:22). The Pharisees unwilling to subject to his authority slandered him and distorted his words and his deeds.

To understand why the Pharisees acted that so, one can find the underlying cause of these two groups of the Pharisees and scribes. They considered themselves knowing about the law better and being holier than others did. They loved to keep the external law and tended to find fault with others and even with Jesus’ words and deeds. They went to the Temple praying to get praise. In the Gospel, Jesus often chastised them, calling them hypocrites and warned his disciples of the yeast of their hypocrisy (Mt 16:6, 11; Mk 8:15; Lk 12:1). The Gospel of Matthew using the whole chapter (chapter 13) recorded Jesus’ warnings against the Pharisees.

Adam and Eve in the Book of Genesis ate the forbidden fruit instigated by Satan. When asked why, Adam blamed Eve, Eve blamed the serpent, standing for the devil (Gen 3:12-13). The evil spirit of the devil always take advantage of man’s neglect to sow division, to rouse envy in people so as to undermine the kingdom of God and to disturb the people of God.

The devil deceived the human being and is still doing so. These days, the devil still tempts the human being, telling us there is no sin in this or that and telling us not to admit wrong doing because admitting wrongdoing is weak. Therefore, we can see a phenomenon of blaming that is spreading over the society. In the family, parents blame children; children blame their parents; brothers and sister blame one another. In the parish, parishioners blame their pastor; pastor blames his parishioners. In the office, employer blames employees; employees blame their employer. In the society, the government blames the citizens; the citizens blame their government.

As long as people do not admit their wrongdoing, then their road to God would be long. As long as people do not admit sin, then their relationship with God would be distant. So in order to come to God, people need a humble attitude, accepting their weakness and sinfulness as to be able to open mind and heart and allow God’s power to activate in their lives. In order to establish a close relationship with God, people need to put God’s words into action. That is the meaning of the word of God: Whoever does the will of God is brother and sister and mother to me (Mk 3:35).

A prayer asking for the grace to obey God’s authority:

Lord Jesus, you are God-made-man!

In order to be a close friend with you,

you teach man to live according to your law

Teach us how to open our mind and heart before you

and seek to live according to your will

so that your grace and power

can transform my life. Amen.