Nativity of JB: Mission of preparation and witness 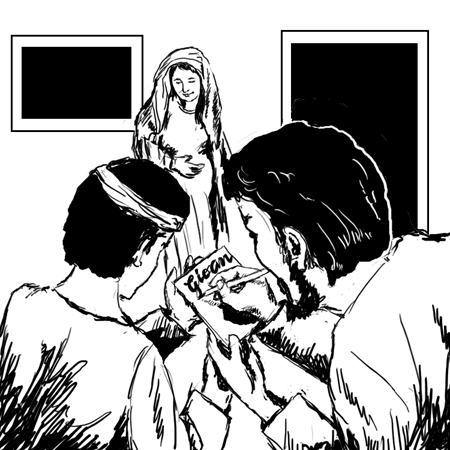 Nativity of John the Baptist: A, B, C

John the Baptist was born in a very special way because his Father Zachariah was old and his mother was also advanced in age and was sterile. That is why when the angel announced to Zachariah that his mother would give birth to a son, he refused to believe the word of the angel and thus was made mute, unable to speak until Elizabeth gave birth to a son (Lk 1:5-25). The name of John the Baptist was also special. When it was time to name him, they intended to name him after his father. However, his mother intervened, saying: He is to be called John (Lk 1:60). People objected saying among his relatives, nobody had that name. Then they asked Zachariah what his son would be called. He asked for a writing tablet and wrote: His name is John (Lk 1:63). At that moment, his tongue was loosed and he raised his voice praising God.

Born in a special way, John the Baptist also lived in a special way. Scripture relates: He lived in the desert until the day when he made his public appearance in Israel (Lk 1:80). His way of living and clothing looked weird: Clothed in a garment of camel’s hair, and wore a leather belt around his waist. Grasshoppers and wild honey were his food (Mt 3:4). Document found near the Dead Sea in 1949 supposed John the Baptist had lived in a monastery in Qumran before he preached a baptism of repentance. At the monastery were found scrolls, pulpit, ceramics, water tank, pipes and bathtubs. John admitted he was only a voice in the desert, preparing the way for the redeemer. His message of preaching must have strong appeal because he preached in the desert and yet people from Judea and Jerusalem went to hear him (Mk 1:5). When John appeared preaching a baptism of repentance, people rushed out asking to be baptized. When many Pharisees and Sadducees asked for a baptism, John with his voice of warning told them: You brood of vipers! Who told you to flee from the wrath to come (Mt 3:7)? His message of preaching was repeated: Repent your lives. The reign of God is at hand (Mt 3:2).

When baptizing, John showed the virtue of humility of the one who prepared the way for the Lord. When seeing John preach a baptism of repentance, people wondered if he was a Messiah. He answered: What you suppose me to be I am not. Rather look for the one who comes after me. I am not worthy to unfasten the sandals on his feet (Acts 13:25).John was not afraid to say to Herod that he was not allowed to take his sister-in-law Herodias as his wife (Mt 14:4; Mk 6:18). Anyway, scripture tells us: Herod feared John, knowing him to be an upright and holy man (Mk 6:20). Even though only with the role of preparer, Jesus talked about John as follows: A prophet indeed, and something more (Mt 11:9). Jesus said more about John: I solemnly assure you, history has not known a man born of woman greater than John the Baptist (Mt 11:11).a

The mission of witness has been given to every Christian at baptism and confirmation. So how can we remain faithful to bear witness to our faith? In bearing witness to the faith, we must remember we are only God’s instrument. We must be careful that less instead of making God’s name to shine, we might do things to show so that our name can be shined or we might advertise our works. Instead of making God’s name be shone, we might dim his name because our ways of life are contrary to the Gospel. After we have made God known, the faithful must withdraw to shadow so that God’s name may be known as John maintains: He must increase while I must decrease (Jn 3:30).

A prayer for being faithful to the mission of preparation and witness:

Through baptism and confirmation

we are called to prepare your way and bear witness to our faith in you.

Teach me how to live my faith,

as to prepare your way to those who have not believed

and bear witness to my faith by word and deed,

by my prayers and good examples

so that people may recognize you and worship you. Amen.