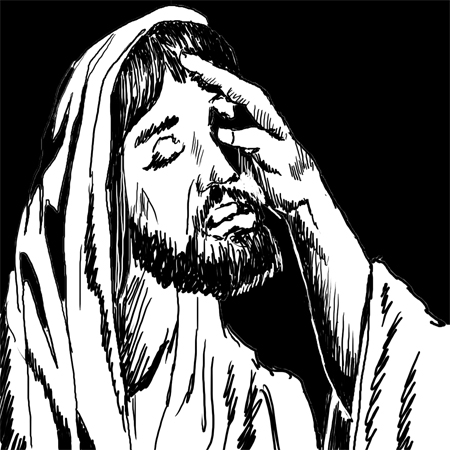 Scripture is the story of our return to God who is waiting for us lovingly and anxiously. We do not appreciate what we have, until we lose it. We do not appreciate home and country until we have to leave it due to wars and political persecutions. That was the case of the Israelites, who were exiles from captivity in Babylon. The Reading from the book of Jeremiah today tells us the prophet looked forward to a day when the Israelites would return to their country.

On that day of deliverance, Jeremiah announced that the blind, the lame and the sorrowful would find consolation in God’s love. Today, Saint Paul’s letter to the Hebrews is a story of sinners, redeemed by Jesus’ blood, returning to God’s love. The gospel tells us that Jesus restores eyesight to the blind man named Bartimaeus.

The blind man in today’s Gospel knew that he lost his vision. Therefore, he implored Jesus to restore his eyesight in spite of objection from the crowd at first. People told him to keep quiet when he began to cry out all the more: Son of David, have pity on me (Mk 10:17). His cry of desperation moved Jesus to pity and action. Not only he received what he asked for, that is to be healed, he also received a spiritual gift, becoming Jesus’ disciple: Immediately he received his sight and followed him on the way (Mk 10:52). His faith healed him.

We do not have to lose something completely in order to appreciate what we had. A certain priest had a stroke due to his high blood pressure. Hemorrhage occurred in his left-brain. As a result, his optic nerve was not given enough stimuli from the brain. So his vision was blurred on the right eye. He saw double vision. To read one page, it took him about half an hour. He could not drive, nor celebrate mass for a month. As a result, he was very low in spirit. Therefore, other parts of his brain were to compensate for what had been lost. His visual field had to be reorganized. With time of prayer and practice to focusing his vision on something without moving his head, he could see better, driving and celebrating mass in a spirit of thanksgiving.

The word blindness is mentioned 33 times [1] in the gospels. One third of these instances, to be exact, 12 of these instances [2] refer to blindness of heart or spiritual blindness.  If we are spiritually blind and we are not aware of it, it is more pitiful for us than for the blind man in the Gospel.

The blind man of Jericho knew that he was blind. As for us, we do not know if we are spiritually blind. As a result, we do not see the light of truth, nor our sins, shortcomings, and we do not know we are on the wrong path. We closed our ears to those calls of repentance. We ignored human sufferings in many cases. We have failed to see and understand the signs of the times, failed to see the events in the world such as wars and disasters or personal misfortunes such as sickness, disease and accident. Those misfortunes may be the signs that God might use to tell us about something else. Perhaps God wants us to put our house in order and to straighten out our lives. What are the causes of spiritual blindness? Jealousy, pride, anger, hostility and bad addictions might block our vision, causing us to be spiritually blind either totally or partially. If we get involved in some wrong direction, we tend to be spiritually blind in that direction.

Today we pray for the blind, asking God to enrich their imagination and their other senses so that they may experience the beauty of creation in a different way. We also pray asking the Lord to continue to enlighten the mind of doctors and scientists so that they may continue to invent devices to help the blind such as Braille to help them read, electronic cane to guide them walk, photo magnetic machine to help them see.

Prayer for the blind:

You are the light of the world.

Forgive me for the times

I take my eyesight for granted.

so that they may find ways

to help the blind help themselves.

Grant that I may know myself good points and bad

so that I may be true to myself. Amen.