11 Sun B: Following the small ways of Jesus

One of the themes can be found in the Scripture is God used those human beings or things, small and humble to do his works. The instruments God used to perform his works do not depend on the ability, talent or educational level of men, but on the power of God and man’s corporation. 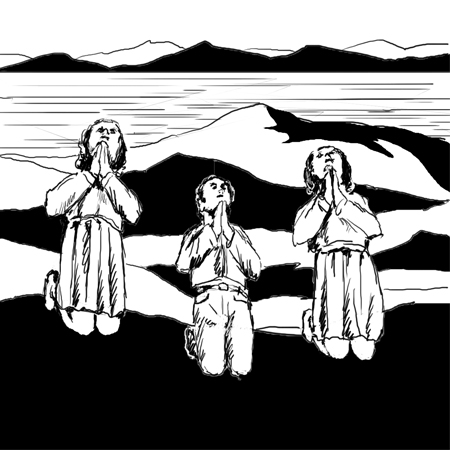 Today Jesus used a parable of the seed (Mk 4:26-29) and the mustard seed (Mk 24:30-32) to show the spread of the kingdom of God. How does the seed sprout and grow, is unseen. However, the seed still grows. At the end, a tree bears fruits. In the parable of the seed, Jesus compares himself with the sower. The seed stands for the Word of God. The harvest is the receptivity of the Word. In this parable, Jesus wants to teach us a lesson of patience, waiting and believing in his mysterious way of redemption with conviction.

The second parable of the Gospel tells us about how the mustard seed sprouted and spread. The mustard seed is the smallest seed. However, when it grows into a tree, birds of the air can cover themselves under its shade. In the parable of the mustard seed, Jesus wanted to talk about the establishment of God’s kingdom on the earth with a small number of the twelve. Jesus’ life also began with small and ordinary things. He chose to be born in the manger. His mother is Mary, a housekeeper. His foster-father is Joseph, a simple carpenter. Why did Jesus not choose illustrious philosophers in the Roman Empire or eloquent Greek speakers to be his apostles? Is that the mysterious way of God, different from the human way? Thus, the characteristic of God’s kingdom on earth is to begin with small beginnings. The second characteristic of God’s kingdom on earth is slow development. God’s kingdom was announced by the prophet Ezekiel over 400 years before the birth of Christ, when he talked about the crest of the cedar taken from a tender shoot, planted on a high mountain, growing leaves and bearing fruits, attracting birds of the air to take their shade (Ez 17:22-23).

Throughout the course of the Christian history, the Church has been still existing and spreading even though with severe persecutions in the world. That is why Tertullian wrote: The blood of Christians is the seed begetting Christians. The blood of over 100, 000 Vietnamese martyrs, of which 117 were canonized, was the seed bearing faith in Vietnam. Thus, the Church or the kingdom of God on earth can be compared to a field of flowers including hundreds of flower and of a myriad of colors. The Church extends her arms to welcome all those of all races, colors, cultures and languages. The Church consists of people of white, yellow, black, red and tawny complexion. The Church consists of men, women and children. To visit St Peter’s Square, we can see this picture clearer and more concrete. The two huge colonnades consisting of many huge columns surrounding St Peter’s Square are similar to two arms of the Church extending to embrace all her children from all over the world.

God’s kingdom must increase from two aspects: in quantity and quality. The kingdom of God increased in number each time there was a person who accepted the faith. However, when one pays attention too much to numbers, one can forget the quality of his kingdom.

A prayer asking for the kingdom of God to come.

Oh, Lord Jesus! The only begotten Son of God!

You came to establish your kingdom, not in the world,

but in the Church on earth.

Teach us how to spread your kingdom.

And may your kingdom reign in our hearts. Amen.