17 Sun. Ord., B: Miracle of bread anticipates the Eucharist

The crowd in today’s Gospel followed Jesus because they saw the miracles he was performing on the sick and the handicapped. They came a long way to listen to Jesus, and see his works and then find themselves in a deserted place without food. 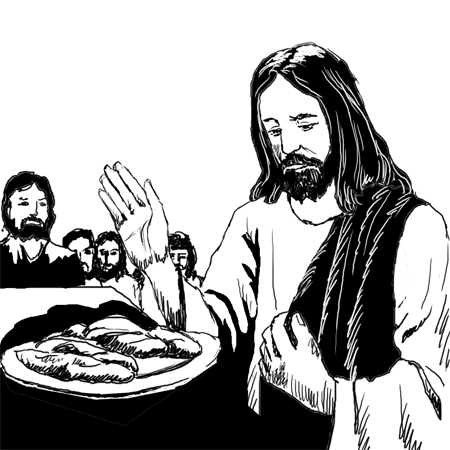 Jesus knew they did not have anything to eat and to send them back home would be a long way. Therefore, Jesus decided to multiply bread miraculously to feed them. Reading the bible we can see each time Jesus performed a miracle he did it upon request. Yet this time, a miracle was performed without being requested because Jesus cared for their physical well-being. Nobody in the crowd complained that they were hungry. The apostles did not suggest any solution to satisfy their hunger. The question Jesus asked Philip how to feed them was only to test his faith.

A reading from the second Book of Kings today tells us the prophet Elisha invoked God’s power to multiply bread to feed people. The story was told as follows. During a famine, somebody brought to Elisha twenty loaves of bread. Even though there was not enough for one hundred people, the prophet still distributed to the people. After they had eaten the bread, there was still some leftover (2Kgs 4:42-44).

The Gospel today tells us Jesus took the bread giving thanks before he gave it to his disciples. By giving thanks when distributing, Jesus wanted to teach us we must give thanks when receiving. The second lesson Jesus wanted to teach us is not to waste food. After the people had eaten the bread multiplied, Jesus told the apostles to collect the fragments left over, less they would be wasted.

The third lesson is Jesus wanted to prepare the apostles’ mind to accept the Eucharist, which he would institute later. Jesus multiplied bread to feed the crowd out of his compassion for them because they had nothing to eat. However, his concern went farther, farther than his response to their physical nourishment. Saint John mentioned the Passover of the Jews was approaching when Jesus performed the miracle of the loaves.

When he does, he ordinarily brought to the story a special and profound meaning. In Year B of Ordinary Time, the Church usually uses the Sunday readings of the Gospel of Mark.

Mark recorded this miracle of the bread. However, the Church uses the miracle of the loaves according to Saint John since it is considered an introductory story to the theme of the bread of life, the Eucharist, which Jesus would institute later. The content of the rest in chapter six of the gospel of Saint John is about the bread of life, the Church used for the four following Sundays. To mention the Passover meal, Saint John wanted to prepare the audience to a reality which Jesus would fulfill later on at the last supper. That was a thought, which the Evangelist John wanted to imply in this miracle of the loaves.

Jesus’ words used at the multiplication of bread: He took the bread, gave thanks, then distributed to his disciples (Jn 6:11) was similar to his words of consecration at the last Supper: He took the bread, gave thanks, broke it and gave it to his disciples (Lk 1:19). The evangelist tells us Jesus multiplied bread to feed 5,000 people as a sign that he would turn bread and wine into his Body and Blood.

Thus, the miracle of bread was an appropriate sign to prepare the people to listen to his teaching on the Eucharist, which he would institute later: The bread I will give is my flesh for the life of the world (Jn 6:51). As Jesus used his power to multiply bread, he would use his power to change bread and wine into his Body and Blood to feed us spiritually.

Today, with a spirit of gratitude, we give thanks to God, using the Responsorial Psalm to remind us of his providence: You open your hand and satisfy the desire of every living thing (Ps 145:16). The early Christians when attending mass kept in mind this sense of thanksgiving. To give thanks in Greek language means Eucharist. For them, to offer the Eucharist means to give thanks.

Every day, you satisfy us with food and drink.

Send rain down on land with barren soil

so that people can drink and grow their food.

Forgive me for the times I took for granted

your gifts and still showed ingratitude.

May I experience hunger for spiritual food:

your word and your sacrament. Amen.