The Gospel of last Sunday tells us the crowd following Jesus to the other side of the Sea of Galilee. They mentioned their ancestors who had eaten manna in the desert provided by Moses (Jn 6:31). 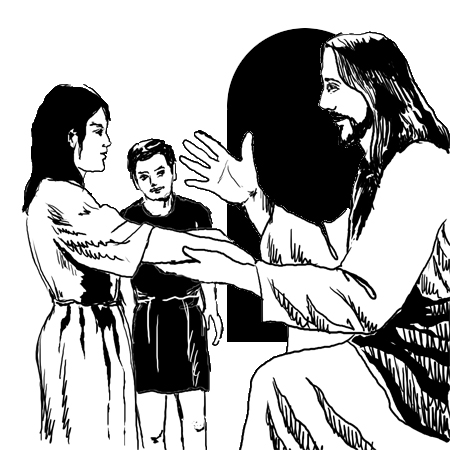 When Jesus told them bread that God gives is the living bread from heaven, bread that gives everlasting life to the world (v. 33), they immediately asked for that bread (v.34).

People in the gospel must have heard of Jesus’s miracles when he turned water into wine at the wedding at Cana and the miracle he healed a royal official’s son also at Cana in Galilee, for they were also Galileans. They themselves ate bread resulted from Jesus’ miracle at the Sea of Galilee when they were hungry. Seeing the miracle, they said to one another this man must have been a prophet sent by God. They said so because they must have heard some prophets who also worked miracles.

However, when Jesus said at Capharnaum he himself is the bread of life that comes down from heaven (Jn 6:41), they rejected him. They thought they knew all about his family background, his person and career. According to them, Jesus is only the son of the carpenter Joseph and Mary, the housekeeper, living a quiet life among them for about 30 years. So how could he come down from heaven (Jn 6:42)? How could he invite them to put their faith in him? How could he give them the bread of life?

There is a proverb that says when people know a person well; they lose respect for that person: familiartity breeds contempt. The Vietnamese also circulate a few sayings: Too much familiarity makes things boring to show nothing new or People living near a pagoda, call Buddha, buddy to show a sneering attitude towards the elders. In order to be able to accept Jesus’ teaching on the bread of life in the Gospel, different from manna which their ancestors had eaten in the desert, Jesus wanted them to put their faith in him who came down from heaven as the Son of God first.

However, for them to put faith in Jesus as the Son of God would cause a thorny problem.

The Jews in general and the Galileans in particular worshipped only one God. Their religion is monotheism. Therefore, when Jesus affirmed that he is the Son of God and came down from heaven, a notion of pantheism with two gods entered their mind. So how could they accept a two-god concept?

However, Jesus still held his position saying that he is the living bread that came down from heaven (Jn 6:41); he whom the Father draws to him will be raised up on the last day (v. 44); he who believes in him has eternal life (v. 47). To say so means Jesus considers himself equal to God. For those who do not believe that Jesus is the Son of God, then that is a blasphemy. However, if Jesus blasphemes, then how can he perform miracles? Those who do not believe like those of the gospel today could say: either they do not understand, or miracle is the product made by his disciples.

The Galileans were not the only ones who refused to put their belief in Jesus as the Son of God and the bread of life. A reading from the book of Kings described the discouragement of Elijah who, was sent to the northern kingdom of Israel to preach the true religion against pagan practices, which Queen Jezebel had brought to the kingdom.

Tired of the people’s stubbornness and Queen Jezebel’s plan to have Elijah killed, he fled to Horeb, not wanting to eat. The angel of the Lord appeared bringing bread to him and telling him to eat to restore strength (1Kgs 19:4-8). Thus, to be able to believe, one must keep one’s mind and heart open to the supernatural revelation and power. In other words, one must eliminate prejudice and preconception about religion and and those who preach religion.

Today each one of us should ask God to help us eliminate  preconception and prejudice about religion and those who preach it and open our mind and heart to welcome the word of God and the body of Christ, the bread of life that satisfies our spiritual hunger and thirst, the bread that brings everlasting life.

A prayer for the grace in order to open our heart before supernatural power.

The incarnate Word of God.

Renew our faith in your real presence in the Eucharist.

Eliminate a ‘familiarity-breeds-contempt’ attitude in us.

And forgive me for the times I closed my heart

before your invitation to faith and reception of the Eucharist. Amen.