29 Sun./ Ord. B: Wanting to be great, must serve as servants

Human ambition is to have a position in the social ladder. That is why the two apostles James and John attempted to ask Jesus a favor: one sitting beside him at his right and the other at his left in his kingdom. 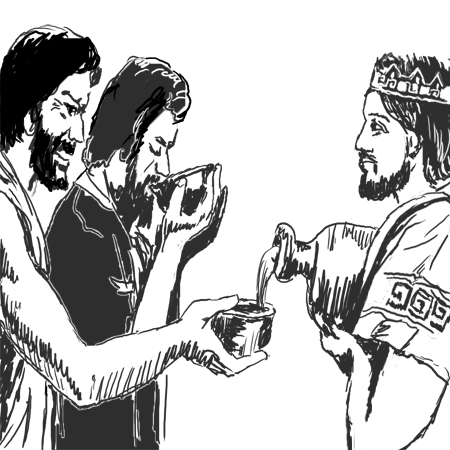 At this point, Jesus immediately challenged the two, saying: Can you drink the cup that I drink or be baptized with the baptism with which I am baptized (Mk 10:38). In ancient times, to drink from the same cup with someone means you want to share his destiny: either good or bad. What is Jesus’ destiny? His destiny is his willingness to accept suffering and cross for the salvation of humankind.

Jesus challenged James and John whether they would be willing to pay the price for sitting at his right and left, i.e., whether they would want to suffer with him and for him. Jesus accepted their affirmation to drink from the same cup with him, meaning suffer persecution and cross with him. However, the sitting position they asked for, would depend on God the Father’s decision. At the time of his teaching, Jesus promised to establish a lasting kingdom, but he has to suffer and die before its completion according to the Isaiah prophecy: The Lord was pleased to crush him in infirmity.  If he gives his life as an offering for sin, he shall see his descendants in a long life, and the will of the Lord shall be accomplished through him (Is 53:10). Thus, he identifies with the suffering servant of Yahweh in Isaiah’s prophecy. The redemptive suffering was also mentioned in Saint Paul’s letter to the Hebrews (Dt 4:16).

The gospel tells us Jesus stopped the ambition of James and John by teaching them: Anyone among you aspires to greatness must serve the rest (Mk 10:43). The apostles want rewards for their efforts. Jesus told them in his kingdom, things are different in his kingdom. His kingdom is not a place for them to show their ego. In his kingdom all those who want influence, recognition and position, must serve others.

To allow them foster their individual ambition, it might become harmful to the church, which Jesus would institute later on. Jesus taught the apostles this virtue so that their successors and collaborators would understand the way of the gospel by avoiding the abuse of status and factions in order to get influence. When the apostles understood the nature of God’s kingdom, they would be the last persons to seek status and rank and position and honor.

The apostles realized that they would have positions in God’s kingdom as well as in the church. However, Jesus told them not to use power in a bossy way but to serve as Jesus did serve: For the Son of Man has not come to be served, but to serve and to give his life

in ransom for the many (Mk 10:45). There are different kinds of services. In the past, servants and slaves did some services. In ancient Palestine, when a guest came to somebody’s house, a servant’s job was to wash the feet of the guest. At the last supper, Jesus took that servant’s job by washing the feet of the apostles. He told the apostles to follow his example by washing one another’s feet, meaning serving one another. Services can be done by employees and by volunteers. Services can be considered as humanitarian works flowing from humanism.

Saint Augustine put it this way: Where there is love, there will be no more hardship. If there is still some kind of hardship, that hardship will be accepted with love. As Christians, we must learn to consider service in the family, in the parish and in society as a means to fulfill our Christian vocation.

Prayer for living the spirit of service:

You came to the earth to teach the apostles

a lesson of service with love.

Teach me to serve for the love of you

and to recognize your image

in my brothers and sisters whom I serve

especially the hungry, the sick,

the suffering and the unfortunate. Amen.