According to scripture, each relationship between God and his people is called a covenant. God initiated a covenant by expressing his love toward his people. God invited his people to respond to his love. 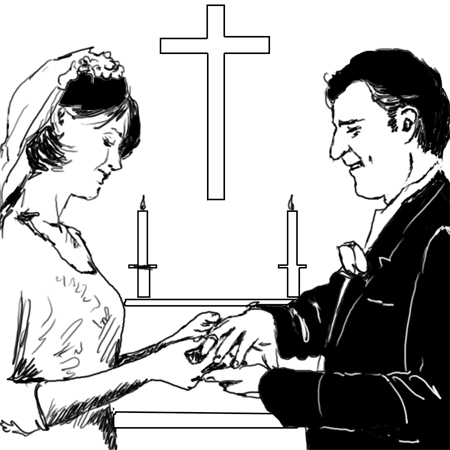 Not only God established the vertical covenant, the up and down relationship between God and his people, but also he established the horizontal covenants between people and people. The book of Genesis tells us God established the marriage covenant by calling Adam and Eve to be faithful in marriage: That is why a man leaves his father and mother and clings to his wife and the two of them become one body (Gn 2:24).

Jesus affirms the inseparability of marriage: What God has joined, man must not divide (Mk 10:9). When some of the Pharisees questioned Jesus, why Moses allowed divorce, Jesus told them it was because of the hardness of their hearts that Moses permitted divorce. However, from the beginning of creation, God decreed that marriage be inseparable as best for the temporal and spiritual welfare of the couple and their children. Divorce would make children suffer losses: material, emotional, mental and spiritual. In the past, marriage was protected to the utmost it could be. Marriage was protected by family, religion and state. It was also protected by tradition and culture. Married life was encouraged and supported by parents, brothers and sisters, friends and neighbors.

Living in our present and modern society, marriage is attacked by all forces: newspapers, magazines, movies, radios, televisions, and even internet. By allowing divorce, civil laws no longer protect marriage and family. Realizing that the wedding lasts only one day while marriage is for life, many dioceses in the United States these days require engaged couples to study and wait six months before their wedding.

In the past, divorce was not allowed. Our grandparents and ancestors were together for life until death. They kept in mind that marriage was for life. Thus, they built up their relationship on the positive points of their partners instead of dwelling on the negative ones. The marriage relationship is the most rewarding experience of all human relationships because it is the closest relationship, bringing security and trust of a man and a woman. Perhaps husband and wife would find true love in married life if they try to find it in friendship.

In our time, people talk a lot about love and not enough about friendship. Friendship in marriage is very important for fidelity. If before marriage, a husband and wife were not friends, they should try to find ways to become friends. If friends do not want to separate, then friendship in marriage should help the couple to be together for life.

Oh Lord, God of the living!

You are always faithful to your covenant

you made with your people.

Teach us to be faithful to our covenants

we made through the sacraments we received.

Do not let us hear empty, whispering temptations

lest we break our promises with one another and with you. Amen.