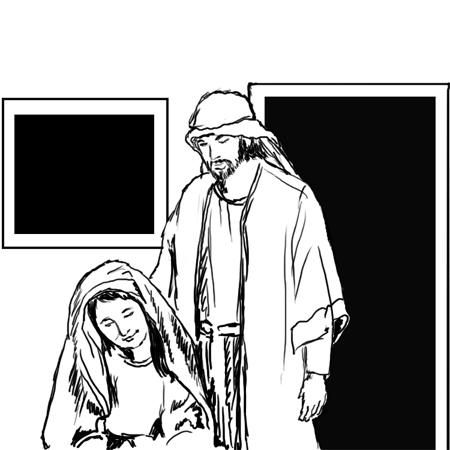 However, if readers like to point out mistake(s) in spelling and grammar, it would be greatly appreciated by the author whose English is not his mother tongue and who did not live in the US until his adulthood.Passive sentences are used intentionally in this context to avoid using the first personal pronoun ‘I’ when applicable, that might be associated with any idea of egotism, in accord with the French saying, known as: ‘Le moi est haissable’ (The ego is detestable).

In today’s Christmas Eve, we limit our discussions on those contradictions up until his birth only. Why did he choose those lowly people and small things as such? At the time just before his birth, many Jewish women dreamed of the motherly role of a messiah. Meanwhile a simple virgin was chosen to be the mother of the savior. Thus, the selection of the Virgin Mary to be the mother of the savior was to fulfill Isaiah's prophecy: The virgin shall be with child and bear a son, and shall name him Immanuel (Is 7:14).

As for his foster father, although he was an ordinary carpenter, yet he was of the house and lineage of David because the messiah was supposed to be a descendant of David. Moreover, Joseph was also of the lineage of Jesse (Mt 1:5) so as to fulfill Isaiah’s prophecy: On that day, the root of Jesse set up as a signal for the nations. The gentiles shall seek out for his dwelling shall be glorious (Is 11:10). Joseph is also a just man, faith filled and responsible for the Holy Family.

The reason the Son of God chose to be born in Bethlehem, a small town, instead of being born in Jerusalem, was to fulfill the prophecy of Micah: And you Bethlehem-Ephrathah, too small to be among the clans of Judah.  From you shall come forth for me one who is to be ruler in Israel (Mi 5:1).

Today Bethlehem is still small. The church of the Nativity is kept hidden in its simplicity, yet has become a holy site, dear to millions of Christians around the world. If we have a chance to visit Bethlehem in the future, we can gather around the manger scene to sing a Christmas song so as to stir up the Christmas spirit. Nobody would question what we would be doing, because others are also in the holy place. In fact, people might join us in singing or at least in spirit especially we sing a song, familiar in melody to many people around the world like Silent Night. Another reason why the Son of God chose to born in the manger for animals was that people could find it easy to come to Him. Those who first came to celebrate his birth were shepherds, considered as outcasts.

Yet in the ordinary things at Bethlehem, it contained a sublime mystery: The Son of God made man to redeem humankind. That is why the angels of the Lord announced: This day in David's city a savior has been born to you, the Messiah and Lord. Let this be a sign to you: in a manger you will find an infant wrapped in swaddling clothes (Lk 2:11-12). The place where the Holy Family settled was also insignificant, a small town called Nazareth to fulfill the prophecy: He shall be called a Nazorean (Mt 2:23). The birth of the God-made-man is a contradictory.

One of the themes we find in the scripture is God often chose lowly and humble persons and small things to do his works and to reveal his power. So in order to seek God, we have to follow his ways: small, simple and ordinary. Otherwise, we will not be able to find him. Jesus himself told us about God’s way when he said: Father, Lord of heaven and earth, to you I offfer praise; for what you have hidden  from the learned and the clever, you have revealed to the merest children (Mt 11:25). Does God really hide the mystery of his Kingdom from the wise and the learned?

If God treats them that way, it seems to be unfair to them since it is God who creates the learned and the clever also. Actually, God reveals himself to everyone, but only those who are humble and open themselves to what is supernatural and spiritual are receptive to his word. As evidence, God revealed himself to Louis Pasteur, chemist and bacteriologist when he was seen praying the Rosary on a train in France. Those learned and clever who rely on themselves tend not to depend on what is supernatural/spiritual. And when they do not want to depend on the supernatural/spiritual, then that is the moment the mysteries of the kingdom are hidden from them. On the contrary, those clever and learned who are humble and keep their mind and heart open, can come to God to receive the mysteries of his kingdom. They are big in mind, but humble of heart. Being small or little in a biblical sense means being simple, humble before God, dependent on him and trusting in him. So we can see the instrument God uses, does not depend on our human wealth, power or knowledge, but on the grace and power of God and our cooperation with his grace.

After those busy days, drawn in external preparations for Christmas by commercials, we need to find quiet time - if possible, before the manger - alone with the Lord, in order to ponder like Mary those contradictions about his birth and his way: Mary treasured all these things  and reflected on them  in her heart (Lk 2:19). To find us think/ponder about something that questions our conscience is the first step for our spiritual awakening, conversion of heart and change of life.

You did not operate our human way.

Yet chose to be born and live

among humble persons and small things,

May I realize that I will hardly find you

among noble folk, in noisy and fussy places.

so that your grace may be reborn in my heart. Amen.