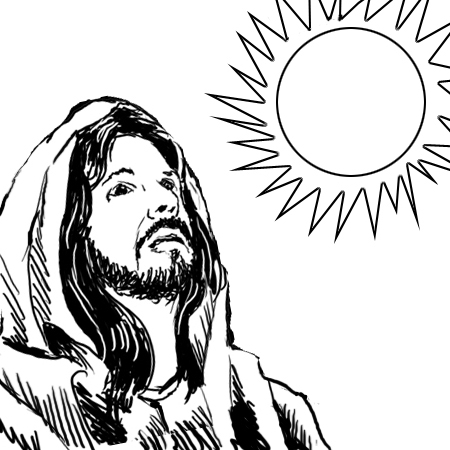 Born in time, but existed from eternity. That is the mystery of the Word incarnate, if understood as something mysterious, unable to explain and understand satisfactorily. Saint John began his gospel by announcing: In the beginning was the Word; the Word was in God’s presence (Jn 1:1). That was something, which Saint John in his book of Revelation had put in the the mouth of the Word of God: I am the Alpha and the Omega (Rev 1:8; Rev 21:6; Rev 22:13) meaning the Savior was the beginning and the end of all things and all living beings.

The Word is the second Person, cooperated with God in the work of creation of human beings and all things as Saint John confirms: Through him, all things came into being (Jn 1:3). The Word is life and light. That is the eternal life and the light of revelation (Jn 1:4).

He came to testify to the light, foretold by Isaiah about seven hundred years before: I sent my messenger before you to prepare your way (Is 40:3; Mk 1:3).The messenger is John the precursor (Jn 1:6). The light of truth, the light of the gospel came into the world, but the world did not accept him (Jn 1:11), nor did it recognize him (Jn 1:10). Those who welcome him and believed in his name were given the power to become his children (Jn 1:12). Why did the world not recognize him? Perhaps people looked for him in royal palaces, instead of poor places, even smelly. Perhaps they looked for him in high positions or in busy market places. Perhaps they looked for him according to human wisdom instead of seeking the divine wisdom, which is contrary to human wisdom.

When the word of God became flesh and dwelt among men (Jn 1:14), it did not reduce his divinity because the glory of an only Son coming from the Father, filled with enduring love (v. 14). He surpasses John because he existed before John (Jn 1:15). To say so means the incarnate Word, born among us has two natures: the divine nature and human nature. The Word incarnated in the womb of the virgin is a mystery. The creator chose to be born out of a creature is a mystery. That was a question raised by Mary. To answer that question, the angel Gabriel responded: For nothing is impossible with God (Lk 1:37). In the person of Jesus, it is not fifty percent of God and fifty person of man combined. In the person of Jesus, it is one hundred percent of God and one hundred percent of man. He is fully God and yet fully human, except sin. That is the difference between Christianity and other religions. Christianity is the religion that came down from heaven. The founder of Christianity is the eternal word from heaven incarnate in the world. According to John, nobody has seen God (Jn 1:18). Through the Word incarnate, born as man and dwelt among humankind, man has seen God because God has let humankind know about Him through his Son. Through the Word incarnate, humankind knows about love, mercy and forgiveness of God. Humankind also knows about the second person of the Trinity who showed his human feelings when he showed pity toward a widow whose only son had passed away (Lk 7:13); he wept when he saw Mary weep at her brother Lazarus’s death (Jn 11:33-35); saddened and feared at the crucifixion (Mk 14:33-34). In addition, perhaps he also told jokes to the apostles and not recorded in the bible.

Jesus was described by an important witness of the Roman Empire during the reign of Emperor Tiberius Caesar. Following is a report on Jesus by Pontius Pilate, Roman procurator of Judea, Samaria and Idumaea.

Among the various rumors that came to my ears, there was one in particular, that attracted my attention. A young man, it was said, had appeared in Galilee preaching with a noble unction a new law in the name of the God that had sent him. At first, I was apprehensive that his design was to stir up the people against the Romans, but my fears were soon dispelled. Jesus of Nazareth spoke rather as a friend of the Romans than of the Jews. One day in passing by the place of Siloam, where there was a great concourse of people, I observed in the midst of the group a young man who was leaning against a tree, calmly addressing the multitude. I was told it was Jesus. This I could easily suspected, so great was the difference between him and those listening to him. His golden-colored hair and beard gave to his appearance a celestial aspect. He appeared to be about thirty years of age. Never have I seen a sweeter or more serene countenance. What a contrast between him and his hearers, with their black beards and tawny complexions.

I was even informed that some misfortune would befall him: that it would be the first time that Jerusalem had stoned those who called themselves prophets; an appeal would be made to Caesar.  However, my conduct was approved by the Senate and I was promised reinforcement after the termination of the Parthian war. Being too weak to suppress an insurrection, I resolved upon adopting a measure that promised to restore the tranquility of the city without subjecting the praetorian to humiliating concession. I wrote to Jesus requesting an interview with him at the praetorian. He came. You know that in my veins flows the Spanish mixed with Roman blood – as incapable of fear as it is of weak emotion.

When the Nazarene made his appearance, I was walking in my basilica, my feet seemed fastened with an iron hand to the marble pavement, and I trembled in every limb, as does a guilty culprit, though the Nazarene was as calm as innocence itself. When he came up to me he stopped, and by a signal, he seemed to say to me: ‘I am here’, though he spoke not a word. For some time I contemplated with admiration and awe this extraordinary type of man – a type of man unknown to our numerous painters, who have given form and figure to all the gods and heroes.  There was nothing about him that was repelling in the character, yet I felt awed to approach him. ‘Jesus, said I unto him at last – and my tongue faltered’ [1]…

Through the report, we can see the person of Jesus so perfect and special, as well as the way and the responses of Jesus were so profound. The procurator of Judea interviewed Jesus tactfully. At the praetorian, Pilate’s wife sent him a message: Do not interfere in the case of that holy man. I had a dream about him today, which has greatly upset me (Mt 27:19). When the chief priests and elders and the crowds wanted to crucify Jesus, Pilate responded: I am innocent of the blood of the just man. The responsibility is yours (v. 24).

A prayer asking to experience the presence of the incarnate Word:

Oh! Incarnate Word living among us.

You also set an example of virtues for us to follow.

Teach me to continue to seek you,

to find your truth, goodness and beauty

the justice of your kingdom

and the values of the Gospel. Amen

[1]. Extracted from Pontius Pilate. The History of Jesus Christ’s three year’s ministry, trial, death, burial and Resurrection. Copied April 7, 1893, from the original Scroll in Greek, now on file in the Ancient Library in Rome.