Epiphany, C: Jesus came to reveal Himself to all nations 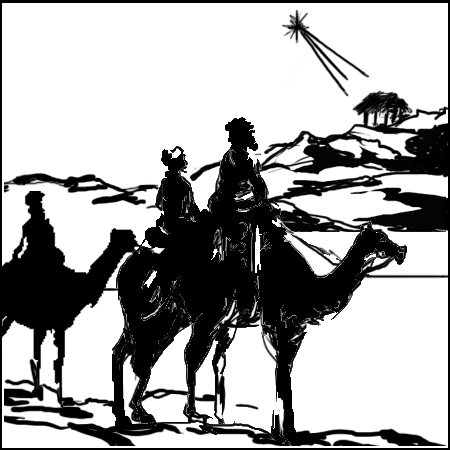 When the magi, with the guidance of the star of wonder, came to worship the newborn king of the Jews, that the words of Isaiah were fulfilled: Caravans of camels shall fill you, dromedaries from Midian and Ephah; all from Sheba shall come bearing gold and frankincense, and proclaiming the praises of the Lord (Is 60:6). They came a long way from the East, probably from Arabia or Persia, to Jerusalem to see the newborn king of the Jews and do him homage. It would have taken months for them to come to Jerusalem and then to Bethlehem for the visit. Seeing the newborn Messiah, they offered him the gifts of gold, frankincense and myrrh (Mt 2:11). That is why the number ‘three kings’ probably came about. In our days, scripture scholars call them wise men or astrologers, kind of amateur scientists.

When Herod heard the Savior to be born, he was in trouble and fearful, afraid of losing his throne. As for the religious leaders of the time, they were indifferent because they thought they had the scripture with them, not having to look around and search for him. That attitude has blinded their eyes, minds and hearts, making them unable to recognize the star in order to go and search for Him.

The feast celebrating the first encounter between the Messiah and the gentiles is called Epiphany, meaning God’s manifestation to the non-Jews. In the old Jewish viewpoint, all those who were not Jewish, were called gentiles. From the reading of the book of Isaiah, the prophet saw before him a New Jerusalem: spiritual and universal, which the gentiles would come to share in the light of salvation.

On this Epiphany, we give thanks to God for having revealed himself to the gentiles. We ourselves were once gentiles before. We also give thanks to God for having called us to his Church, his kingdom on earth through baptism. Baptized as infants, we might have the same complacent attitude as of the religious leaders of the time of King Herod, practicing our faith in a routine fashion, in a mechanical way. The truth is we still have to go and search for God. We still have to seek him, seeking his way of wisdom, justice and holiness, seeking meaning in his word and his will. To search for God is an on-going process. Although the Lord did come into our human history, and we have believed in him and accepted him through baptism and confirmation, we still have to search for him, to discover his presence in our lives.

Like the magi who, journeyed months through desert to search for the newborn king, we have to look around and search for God in those unusual and varied places and circumstances. Like the magi, who observed the wonder star with their minds and hearts open so that they could go and search for God, we need to observe the signs of the times. The signs of the times might be events happening in the world such as hurricanes, floods, earthquakes, fires and wars. They might be events happening in our individual lives such as sickness, disease, and accident. We need to keep our eyes, minds and hearts open to search for God’s message in order to find out whether God uses those events to tell us something. Like the magi, who found the newborn Messiah not in the capital of Jerusalem, magnificent and splendid, but in a small town of Bethlehem, not in a royal palace, not in a hospital, but in a stable of sheep and cows, perhaps smelly and filthy, we may find God in people and places we least expect, perhaps filthy and miserable.

We should not let those events pass by accidentally without drawing a lesson. If an event passed by accidentally, it was because we were careless and thoughtless or our minds and hearts are full of obstacles such as worry, pride, conceit, selfishness, jealousy, revenge that made us think that nothing happened.

Prayer for continuing to seek God:

When the magi came to worship you,

your star guided them

to the manger of Bethlehem.

Teach me to seek you sincerely

at places or things

which people do not think that you are there

and may I recognize your presence. Amen.