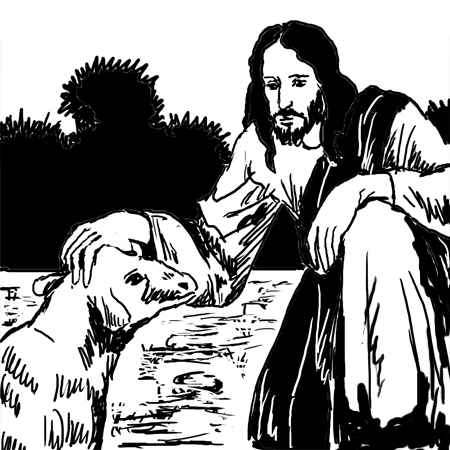 The fourth Sunday of Easter for the three liturgical cycles of the year is called Good Shepherd Sunday. The ancient Christian art often pictures Jesus as the good shepherd. That image was pictured in the Old Testament as the shepherd of his people. The ancient Jews were a pastoral people. Therefore, their literature, the Old Testament books, also touched upon pastoral life. Jesus himself employed pastoral imagery familiar to people to teach them the spiritual truths of Christianity.

In today’s gospel, Jesus tells us: My sheep listen to my voice (Jn 10:27). God’s voice is his word in scripture. Scripture contains consoling and encouraging words. It also has words of warning and condemnation. There are some words in the scripture, which people, perhaps including us, do not want to hear. However, if we want to be Jesus’ true disciple, we have to listen to the whole scripture. We cannot listen to this word and omit the other. We cannot close our eyes and ears before words of warning and condemnation in the scripture.

There was a story about a tourist travelling to the Middle East. On one occasion, the tourist saw three shepherds, each leading his flock to a brook of water. When the three flocks of sheep began to mingle, the tourist could not distinguish which sheep belonging to which shepherd. When the sheep had satisfied themselves with their drink, the first shepherd began to call his sheep, then the second, and then the third. The tourist thought that perhaps he could fool the sheep. Therefore, he borrowed one of the shepherds’ clothing to put on, then attempting to imitate his voice, he called his sheep. However, no sheep moved [1]. We thought sheep are slow, but in this case, they are smart. Sheep do not follow the voice of a stranger, because a stranger does not know his sheep, or feed, or protect them when wolves attack them.

Today we hear many voices from books, newspaper, magazine, radio, television, and internet. We hear from political parties, social and religious organizations. We hear from different interest groups telling us what to believe, what not to believe, what to doubt, what to do, and what not to do and what to be reexamined. Therefore, we need to be careful to find out which voice is worthy of our listening. What we consider as sin, the mass media pictures it as a different life style. Thus, if something is considered as a life style, then it is more acceptable than sin.

Today there is another essential matter - a matter that threatens the unity of the church: that is the issue of the authority of the church to teach versus individual conscience. And there are different kinds of conscience. If we want to be guided by our conscience, we need to look at Jesus who is the way, the truth and the life (Jn 14:6) and who speak to us through his Church: one, holy, catholic and apostolic church [2] A certain sociologist said: Man is a social animal. As a social animal, man wants to belong to a group or organization or a party. In order to belong to a group, people might be tempted to follow the group’s way of life, which is harmful to their life of faith.

In order to get votes from a certain organization, people might be tempted to abandon their practice of faith. In order to be accepted to a political party, people might be under pressure to vote with the party’s platform on a certain issue, which is contrary to the Gospel values and the church teachings.

Therefore, we must realize that we cannot serve two masters (Mt 6:24; Lk 16:13); we cannot have both choices. The Acts of the Apostles today tells us Paul and Barnabas took a choice to preach Jesus Christ, suffered and risen from the dead in order to save humankind. As a result, the Jews expelled them from their territory (Acts 13:50).

At the end, they were persecuted and put to death along with hundreds of thousands of other faithful in the world. The book of Revelation was written to console Christians who suffered persecution for their faith in the good shepherd. Christians were not persecuted in the old times only. In our days in different parts of the world, Christians are still being persecuted.

Again, Jesus tells us: My sheep hear my voice, I know them and they follow me (Jn 10:27). To hear is one thing, and to follow is another thing. We may hear the word of God, and accept it as the truth, as the word of wisdom, but do not follow and keep it. Jesus likens the one who hears the word of God and does not practice it is like  the one who builds his house on sandy ground, the rains fell, the torrents came, the winds blew and lashed against his house. It collapsed under all this and was completely ruined (Mt 7:27).

Prayer asking to hear and follow the voice of God:

Your word has everlasting life.

Teach me to recognize your voice

and listen to your word

and put it into practice in my life.

Help me to get rid of all obstacles from my life

so that your word may enter my life. Amen.