3 Sun. / Easter C: Relying on God’s grace and his power 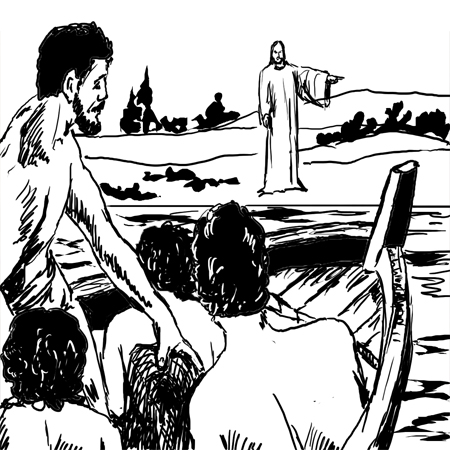 In their quandary mixed with joy and sadness: sad because of the crucifixion of their master, joyful because of his resurrection, worrisome because the presence of their master was no longer on a regular basis as before, but now he appeared and then disappeared.

In that quandary not to know what to do, they decided to go fishing for relaxation. Entering the boat, they lowered the net all night long without catching anything. Even though as fishermen, today they failed. If we put ourselves in their situation, how frustrated we would feel.

In their discouragement, Jesus appeared to them. He pretended to ask: Children, have you caught anything to eat? (Jn 21:5). They responded in unison: Not a thing (Jn 21:5). According to the stranger’s suggestion, they lowered the net over the right side of the boat. The result was their net was full of fish.

With that catch of fish, the beloved disciple of Jesus recognized the stranger as their master. When Peter heard it was the Lord, he jumped into the water toward Jesus. In this situation, when the Apostles did not recognize Jesus at first in today’s Gospel and in the Gospel of Saint Luke (Lk 24:37) was similar to the situations when Mary of Magdala and the two disciples on the road to Emmaus also did not recognize Jesus at first (Jn 20:14; Lk 24:16).

Why is that so? The reason was the apostles did not expect Jesus to rise even with Jesus’ prediction about his resurrection. Secondly, according to the Gospel of Mark when Jesus appeared to the apostles, he was revealed to them completely changed in appearance (Mk 16:12). A changed appearance was not because Jesus lost his weight and strength due to his being tortured and lying in the tomb for three days without food and drink. Saint Paul interpreted Jesus’ resurrected body different from his body before his death as follows: A natural body is put down and a spiritual body comes up (1Cor 15:44).

Thus, the number 153 is a symbol of a great crowd of catechumen, converted to the faith later on. According to the Acts of the Apostles, they received some three thousand men converted to the faith in one day at one time (Acts 2:41). Another message of this catch of fish was the apostles had to put faith and trust in Jesus, even in an adverse situation.

They had to depend on God’s grace and his power. They had to realize that even though they were professional fishermen, it was not necessary that they had to catch fish. They had to realize that the instrument God used to do his work of salvation did not depend on human ingenuity and knowledge, but on their cooperation with God’s grace. The power of the risen Lord transformed them. Before that, the apostles were timid like chicken. That is why they were in hiding when Jesus was persecuted and crucified to the cross.

responded to the Sanhedrin: Better for us to obey God than men (Acts 5:29). As witnesses, the apostles had to speak the message, even though it was unwelcome and dangerous to their lives.

Through the sacraments of baptism and confirmation, each one of us, not just the clergy, is called to live and bear witness to Christ in the family, neighborhood and community. There are many ways to bear witness to the faith: by prayers, and good examples, by ways of living one’s faith, by acts of charities and by preaching the Gospel by what we say and do. God is always present in our midst even if we do not feel his presence.

So today we need to ask God to help us experience his presence and to realize that God is present with us in all the circumstances of our lives even if we are not aware of it.

Prayer for trust and faith in God’s power:

You are the almighty and powerful God.

Teach me to depend on you

in all the circumstances of my life:

in sickness and in health,

in success and in failure,

in good times and in bad.

Let us never lose our faith and trust in you. Amen.